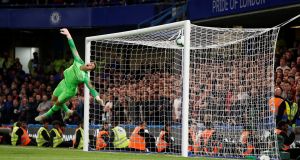 Eden Hazard, the match-winner in Wednesday’s Carabao Cup clash at Anfield, had looked like inflicting the Reds’ first league loss in seven games.

Missed opportunities from Mohamed Salah, his replacement Xherdan Shaqiri and Roberto Firmino had looked like being costly.

But former Blues striker Sturridge had other ideas, curling a fine effort into the top corner two minutes after coming on as a substitute for James Milner.

Although the Reds could not build on six wins in six games – their best start in 28 years – Jürgen Klopp will be content with extending their unbeaten run.

Liverpool’s most recent title success came in 1989-90 and Chelsea supporters reminded the visitors of recent near misses, singing about Steven Gerrard’s slip in April 2014 which effectively ended the Reds’ title challenge.

Chelsea’s start under Maurizio Sarri has reignited belief of a third title in six seasons. This was the biggest test of that possibility so far.

Sarri-ball versus Klopp’s gegenpressing led to an intense encounter.

Chelsea appeared vulnerable early on as twice David Luiz made minor mistakes, while his opposite number Virgil van Dijk was a commanding presence.

Like the team, Hazard has had one season on form, the next season off since his summer 2013 arrival at Stamford Bridge. This season the Belgium playmaker is arguably in the form of his life.

Joe Gomez was alert to snuff out the danger of Hazard early on and Liverpool had the better chances.

Salah, whose brief stint at Chelsea came as Hazard’s understudy, turned away from Jorginho and Antonio Rudiger before slicing a shot high and wide.

Sadio Mane fired wide and Firmino threatened. Luiz blocked his fellow Brazilian’s shot and appeared to reach out to grab him, but Chelsea conceded only a corner.

A long Luiz pass turned Liverpool and freed Willian. Faced with the on-rushing Alisson, Willian tried to play the ball for Olivier Giroud only for the Reds goalkeeper to make a crucial interception.

Next Alisson was beaten with a move Hazard started and finished.

The Croatia midfielder then threaded a fine pass for Hazard to run on to and the Belgian finished clinically. Alisson got a hand to the shot, but could not prevent Hazard’s sixth league goal of the season.

Salah was denied again after shrugging off Alonso and rounding Kepa when Rudiger cleared off the line.

Chelsea resumed determined to add to their advantage, but Liverpool attempted to wrest the initiative, enjoying possession and territory.

Mane darted by Cesar Azpilicueta and Kepa saved well low to his right.

Chelsea were left to play with scraps but almost had another when N’Golo Kante took a quick free-kick, releasing Hazard.

He had just Alisson to beat, but the goalkeeper stayed big, his save resulting in the ball ballooning on to the roof of the net.

A subdued Salah was taken off for Shaqiri as Klopp sought some ingenuity.

Chelsea fashioned another opening as Kovacic shot from the edge of the area, Alisson saving.

Shaqiri next spurned a straightforward chance, side-footing wide from Andy Robertson’s cross, and Luiz cleared Firmino’s header off the line after a Milner cross.

Liverpool levelled when Sturridge unleashed a vicious drive into the top corner, punishing a rare moment when Kante did not close down an opponent.

Marcos Alonso headed wide from a corner with the final touch of the game as the points were shared.