Jose Mourinho insists ‘no fall-out, no problems’ with Pogba 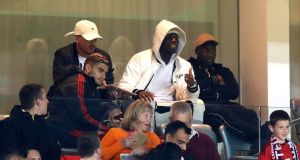 Manchester United’s Paul Pogba in the stands during the defeat to Derby. Photograph: PA

Jose Mourinho stripped Paul Pogba of the vice-captaincy but denied any fallout with the midfielder after Manchester United surprisingly tumbled out of the Carabao Cup to Derby.

Tuesday proved to a busy day at Old Trafford, where record-breaking revenues were quickly overshadowed by fresh questions over the club-record signing and a shock cup exit.

Phil Jones’ spot-kick was saved by Scott Carson as Derby won 8-7 on penalties after it had finished 2-2 at Old Trafford, with Pogba watching from the stands as his team-mates bowed out to Sky Bet Championship opposition.

Despite being rested for the third-round tie, the 25-year-old remained a hot topic as it was claimed in the build-up that Mourinho had told the World Cup winner that he would not captain United again in front of the squad.

Asked about those reports, Mourinho told Sky Sports: “The only truth is that I made the decision of Paul not to be the second captain any more but no fall-out, no problems at all.

“No fall-out at all, no problems at all, just one decision that I don’t have to explain.”

Sources close to the club have not been surprised by the latest development, which will only increase speculation as to whether Pogba will stay at Old Trafford.

The France international captained the side in the Premier League openers against Leicester and Brighton in the absence of Antonio Valencia, just as he did in last week’s Champions League win at Young Boys.

Pogba scored two and set up the other in the 3-0 victory in Switzerland, only to under-perform on Saturday’s return to league action against Wolves.

The 25-year-old was dispossessed in the move that led to Joao Moutinho’s equaliser, with the midfielder saying afterwards that United should “attack, attack, attack”.

Those comments are said to have got under Mourinho’s skin, but it is reported that Pogba’s desire to leave Old Trafford for Barcelona was behind the decision to strip him of the vice-captaincy.

The pair’s strained relationship is in stark contrast to the one between the Portuguese and Frank Lampard during their successful time together at Chelsea.

“He said what a great performance it was from the team,” the Derby boss said of Mourinho. “I appreciate that because it’s not easy in defeat in that last moment.

“I think he actually said that before the penalties, but I appreciate it.

“Jose was very welcoming as a whole. We obviously know each other, and he came and spoke to me before, we spoke during and afterwards. It was an honour for me to go up against him.”

United paid for their failure to build on Juan Mata’s early opener on Tuesday, with Harry Wilson scoring an exceptional free-kick and substitute Jack Marriott directing home either side of Sergio Romero’s sending off for handling outside the box.

Marouane Fellaini’s stoppage-time goal secured a 2-2 draw that took the third-round tie to penalties, with the spot-kick success giving Lampard the most memorable win of his short managerial career.

“I think I need time (to digest it),” the former England midfielder added.

“It was special — a special performance. To come to Manchester United and not to just nick one, but I think to play the way we played, doing all the things we have been working towards in a short space of time.

“To do it on this stage against this team full of top players with our squad which has some younger boys in it as well — the players were immense. What a night for the club to come here and do that.”

Meanwhile Pep Guardiola believes Phil Foden can be a Manchester City star for the next decade — but refused to liken the midfielder to former Barcelona ace Andres Iniesta.

Foden ran the show as holders City eased into the fourth round of the Carabao Cup with a 3-0 win at Oxford on Tuesday night.

The 18-year-old played a part in goals for Gabriel Jesus and Riyad Mahrez before rounding off the victory with his first senior strike.

Dubbed by City supporters as the ‘Stockport Iniesta’, Oxford boss Karl Robinson also drew comparisons with the former Spain international — who has won a World Cup and four Champions League titles during an illustrious career.

Guardiola did not want to burden Foden with such a parallel but feels the England Under-19 international can become a long-term regular at the Etihad Stadium.

“Wow. These are big, big words. I have said many times we are delighted with Phil,” Guardiola said of Robinson’s likeness.

“I am not going to say he is going to become Andres Iniesta because it puts pressure on him, Iniesta is by far one of the best players I ever saw in my life so we cannot put the pressure on Phil.

“But he has the quality to stay here for 10 years because I think he wants to stay, I think the club wants him to. But step by step, he needs to play regularly, but I think he has all the skills to play with us.”