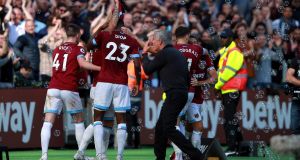 Jose Mourinho aimed another shot at those who criticise his team selection after Manchester United crashed 3-1 at West Ham.

Mourinho left the under-performing Alexis Sanchez out of his squad for the trip to the London Stadium and then revealed his decision to start with a back three, including midfielder Scott McTominay, was to accommodate Anthony Martial.

But Martial was hauled off with 20 minutes remaining, along with Paul Pogba, as Felipe Anderson’s early strike, a Victor Lindelof own-goal and Marko Arnautovic’s finish left United empty-handed.

And Mourinho’s glowing praise of youngster McTominay gave the distinct impression that he was sending a message to certain other players.

“I wanted to play Martial, it’s something [people] are asking for a long, long, long time,” he said.

“I left Alexis out, and I think Martial is not a player very focused on his defensive duties so to play him as second striker would be easier for him.

“But at the same time I felt we needed quality on the ball, building from the back, and Scott McTominay has that quality. Everything that left his foot was correct.

“He’s a special character, a special personality that a team in a negative moment needs.

“Do my other players have that mentality? Not all of them. Everybody is a different person.

“Scott McTominay is kid with a special character, very humble, aggressive in a positive way, brave, he’s a special kid.”

Unfortunately for United the back three found a front three – Anderson, Arnautovic and Andriy Yarmolenko – in blistering form.

West Ham, buoyed by a fortnight which had seen them take four points from Everton and Chelsea before putting eight past Macclesfield in the Carabao Cup, were ahead after five minutes.

Pablo Zabaleta was slipped in behind Luke Shaw down United’s left and his low cross was met at the near post with a deft backheel from Anderson.

Mourinho claimed Zabaleta was offside, and that the same defender fouled Marcus Rashford in the build-up to Arnautovic’s late goal, which came moments after substitute Rashford had halved the deficit.

But he did admit defensive errors were to blame for Yarmolenko’s shot looping into the top corner off Lindelof just before half-time.

Hammers boss Manuel Pellegrini said: “I’ve not seen the goals yet. But we scored three, United had two opportunities.

“Otherwise I don’t remember any tense moments in our box. I think the result reflects what happened in the 90 minutes.”

On the absence of his fellow Chilean, Pellegrini added: “I was surprised about no Alexis Sanchez.

“That for me was a relief because Alexis makes a difference. They have very decisive players in the last metres. but I think Alexis gives a little bit more.”