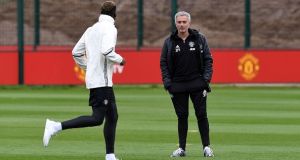 José Mourinho’s fractured relationship with Paul Pogba may have been laid bare on Wednesday morning in footage that appears to catch them having unhappy words that end with the Manchester United manager telling the midfielder to “get out”.

The episode was caught by Sky Sports cameras that filmed United’s training session on Wednesday morning. According to a club source permitted broadcasters were at the Carrington training ground to record the monthly rights-holders session.

In the footage Pogba can be seen high-fiving Michael Carrick, a coach, then shaking a non-football staff member’s hand but as he does the latter Mourinho seems to say something to him that surprises the 25-year-old.

Pogba turns, Mourinho continues to speak to him, and as they wander off the conversation continues with the Frenchman at one point turning back to the Portuguese, spreading his palms in a kind of what-is-this-about gesture before shrugging. He then points at himself as if to say: “Who, me?”

What has been said between the pair this morning? 👀 pic.twitter.com/nRiTEgDJlH

It is at this moment that Mourinho can be heard speaking what seems to be the words: “Get out”.

The exchange comes as United backed Mourinho in his power struggle with Pogba, with the hierarchy supportive of his decision to strip the midfielder of the vice-captaincy.

Before Tuesday night’s defeat to Derby County Mourinho informed Pogba he will not captain United again, the 25-year-old having led the side in three game this season. While this further fractured the relationship between manager and Pogba, it is understood that the executive have no intention of asking Mourinho to reconsider the decision.

Pogba was one of the players rested by the 55-year-old for the penalty shootout loss to Derby at Old Trafford and though Mourinho later claimed there was no issue between them, his decision regarding the captaincy casts serious doubt over the 25-year-old’s long-term future at the club.

Pogba appeared to question Mourinho’s tactics after United’s 1-1 draw with Wolves at Old Trafford on Saturday when he said that United should “attack, attack, attack” more.

Barcelona had a £45m bid turned down by United in the summer and the Catalan club may consider a fresh offer in the January window.