Cristiano Ronaldo will face Man United as ban is reduced 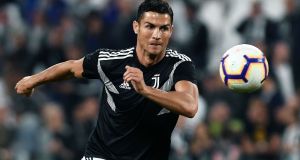 Juventus’ Cristiano Ronaldo will be available to face Manchester United in the Champions League after his ban was reduced. Photo: Marco Bertorrello/Getty Images

Cristiano Ronaldo is free to face Manchester United in the Champions League next month after disciplinary chiefs decided not to increase his ban.

The 33-year-old Juventus forward incurred an automatic one-match suspension when he was sent off for apparently pulling defender Jeison Murillo’s hair during his side’s 2-0 Group H victory in Valencia on September 19th.

There were fears that an extended suspension could cost him his trip back to Old Trafford on October 23rd, but Uefa announced on Thursday afternoon that its control, ethics and disciplinary board had decided one match was sufficient.

A Uefa statement said: “The CEDB has decided to suspend the Juventus Football Club player Cristiano Ronaldo for one (1) UEFA competition match for which he would be otherwise eligible.”

The Portugal skipper will sit out the home clash with Young Boys on October 2nd as a result.

He was dismissed by German referee Felix Brych 29 minutes into the game at the Mestalla Stadium after the official’s attention was drawn to his clash with Murillo by one of his assistants.

Ronaldo left the pitch in tears after Brych brandished the red card with Juve coach Massimiliano Allegri later bemoaning the lack of VAR in the competition.

Uefa had announced earlier on Thursday that the VAR system will be used in the Champions League from next season.

The match was goalless at the time, although the 10 men went on to win it courtesy of two Miralem Pjanic penalties.

The decision will come as a relief to the former Real Madrid star, who spent six hugely successful years at United before his €94million move to the Bernabeu Stadium in July 2009.

Ronaldo has endured a modest, at least by his standards, start to life in Italy following his €100million summer switch.

He has managed just three goals in his seven competitive appearances to date, although they have all come in his last three Serie A outings.