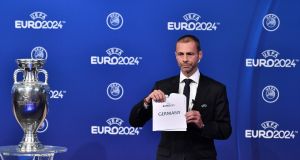 The country’s football federation (DFB) may have some work to do to win over a significant number of sceptical supporters back home, but there was obvious relief amongst the members of its delegation in Nyon as it was announced that the Uefa’s Executive Committee had overwhelmingly voted to award Germany the right to host the 2024 European Championships.

Having gone out on a limb at the behest of Uefa’s then president Michel Platini last time when it decided to spread the tournament out across the continent, the organisation’s board went for what was by far the safer of the two available options this time with Turkey ultimately losing out by 12 votes to four with one abstention and the two ExCo members from the bidding nations prohibited from voting.

For Turkey the decision marks the end of a fourth failed attempt to stage the tournament following bids for the 2008, 2012 and 2016 editions of the tournament, the first of them mounted in conjunction with Greece.

The Turks ran France close for the 2016 tournament despite the influence of Platini but were well beaten this time as the ExCo members took on board the reservations expressed in Uefa’s evaluation report which was published last week.

It had pointed to the country’s failure to propose a specific “human rights strategy,” as required under the bidding procedure as “a concern,” and listed issues over hotel accommodation and transport infrastructure as potential “risks”.

The amount of investment already poured into the construction of stadiums and related facilities by the Turkish government suggested that it was prepared to spend heavily in order to address any problems. But the uncertain economic situation currently being experienced would not have reassured Uefa officials concerned to protect one of the organisation’s key revenue streams, while the autocratic nature of President Recep Tayyip Erdogan’s presidency made any leap of faith that much harder to make.

Germany, by comparison, could hardly have been a more certain option with most of the infrastructure in place since 2006 when the country hosted a World Cup in most of the same cities and stadiums. Only relatively minor renovations are required to the 10 venues (Cologne, Dortmund, Dusseldorf, Frankfurt, Gelsenkirchen, Hamburg, Leipzig, Munich, Stuttgart and Berlin) put forward this time and the final will once again be at the capital’s Olympic stadium.

“I feel a great relief, the pressure was huge,” said former international Philipp Lahm, who is set to lead the local organising committee, after the decision had been announced. “We can celebrate a big party together at our home. We have great stadiums and fans who love football.”

That last bit is undoubtedly true but protests at club games last weekend suggested they are not all completely enamoured with the federation or its bid with banners displayed mocking its “United by football” slogan amid anger over the way the German game is perceived to have been increasingly taken over by commercial interests.

A particular focus of supporters’ anger has been the greater flexibility shown by the Bundesliga in its scheduling of games for television. At the game between Werder Bremen and Hertha Berlin staged on Tuesday of this week one banner declared that “Football is for you and me – not for fucking pay TV”.

In relation to the European Championships, there are concerns that the cost of whatever improvements are carried out at stadiums will be passed on to fans and that in some cases their matchday experience will actually be made worse by the requirements of a tournament that move on from each venue after a handful of games.

The DFB has yet to entirely recover from the allegations of bribery surrounding its successful bid for the 2006 World Cup and related tax issues continue to pose a major threat to the organisation’s finances at a time when it has committed to major investment in its own national headquarters and academy.

The timing of Thursday’s announcement also proved a little awkward as President Erdogan had just arrived in Berlin for a state visit that takes place in the aftermath of the controversy that surrounded his meeting with Mesut Özil and Ilkay Gündogan on the eve of the World Cup in Russia. Özil subsequently retired from international football alleging that he had been the victim of widespread racism.

At the actual announcement in Switzerland on Thursday the only Turkish reaction was provided by the country’s Minister of Sport, Mehmet Kasapoglu, who said simply that: “The fact that the Uefa, despite all our strengths, has chosen not to award the European Championship to our country is a sad situation.”

For his part, Uefa president Aleksander Ceferin, said that: “That was a democratic decision and therefore a correct decision. I’m looking forward to a great tournament.”

He did not give any indication as to how he had voted but it is unimaginable that the Germans could have won so convincingly without Ceferin’s support. FAI chief executive John Delaney, who has worked hard to publicly ally himself to Ceferin, also voted for Germany.