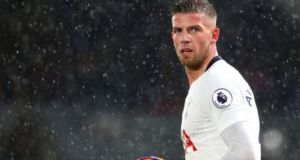 Toby Alderweireld of Spurs. “We’re not bothered what people think. We just like to stick to our own performances and try to improve.” Photograph: Getty Images

It has long been a part of the pre-season ritual. Tottenham’s players and supporters will scan the fixture list and, first and foremost, circle the derby against Arsenal. It is doubtful whether it will ever change because no opponent can stir the same depth of feeling as the old enemy.

But these days there is a bigger picture at play, and Spurs folk have other highlighting to do, taking in top-four Premier League duels and decisive Champions League dates. The past week or so has seen the domestic visit of Chelsea and a European one from Internazionale. Sunday’s showdown at the Emirates Stadium has lurked in the background – at least until now.

“It’s a very big game, but so was Inter on Wednesday and so was Chelsea last Saturday,” Toby Alderweireld says. “That says something about the evolution of Spurs. The derby is not the biggest game of the year, although it’s a very big game and we know this. We’re going to do everything we can to get three points.”

The balance of north London power is a perennial discussion, and Spurs can point to having finished above Arsenal in each of the last two seasons, having been below them for the previous 22. Top team in the capital last time out, they are currently three points better off than Arsenal.

Yet when Alderweireld charts Tottenham’s progress, both over the course of this season and, more generally, since Mauricio Pochettino took over as manager in 2014, the defender prefers to focus on internal markers. Chief among them is the mentality – which is Pochettino’s obsession.

Spurs won six in a row in all competitions, with the 3-1 against Chelsea the most impressive. The 1-0 against Inter was eye-catching in a different way, a triumph of patience and resilience, and it has all suggested that after a season of problems – some off the field, linked to the delayed new stadium – the team have rediscovered their best form.

Alderweireld disagrees, partly because he can never be satisfied. It is a mindset he believes must permeate the dressing room.

“We don’t feel we are hitting our best. We are the most critical persons of our own performance. A lot has been said about the stadium and the pitch at Wembley, and I think we’re doing very well but we can improve. And even if we go well, we can improve further.”

Alderweireld does accept that the Chelsea and Inter victories have “showed we can compete with anybody”. The team are “making steps” and the biggest one, he says, has been the return of attacking cohesion, particularly against Chelsea.

“We’re playing good football now and before was maybe different,” Alderweireld says. “Football can ask for other things, like strength and digging out results. That’s football as well. Sometimes it’s difficult. Sometimes in the past we’d play well but if we didn’t play well, we didn’t get the results. Now if we don’t play well we’re still defending very well.

“Defensively we’re getting better, and also in terms of attacking football, as we saw against Inter. We play well as a team, defending and attacking as a team. Our goal against Inter started from the back. And if we defend we start with Harry Kane. ”

Alderweireld’s personal evolution has been an interesting sideshow. The 29-year-old endured a nightmarish second-half to last season when a hamstring injury set him back. He struggled to regain his place in the team, and it felt as though his prospects were harmed by the impasse in negotiations over a new contract.

Mindful that he could leave for a knockdown £25 million at the end of this season, the club were open to offers for him in the summer. Manchester United were heavily linked to him but there was no movement and Alderweireld has bounced back. After a successful World Cup with Belgium, he has started 12 of Tottenham’s 13 league games and four of the five in the Champions League.

Not many players have fallen from favour under Pochettino only to return on a regular basis, but it would be a surprise if Alderweireld did not sit tight to test his release clause and a bigger one if a rival club did not meet it. Will he still be at Spurs next season? Is it now or never for him in terms of winning something at the club?

Tottenham remain within striking distance of the leaders, Manchester City, but nobody seems to consider them title contenders, mainly because of City’s form. That might change if they produce a statement victory at Arsenal to set alongside their dismissal of Chelsea. Alderweireld, however, is preoccupied simply by pushing his limits and those of his teammates.

“We’re not bothered what people think,” Alderweireld says. “We just like to stick to our own performances and try to improve. Even if we have bad results we’re doing the same things because we know that’s the way to win.

“There are good fundamentals and we go to Arsenal to win. They are pretty different under Unai Emery – good attacking and defensively more sorted. We have to be top to beat them but we’re confident.”