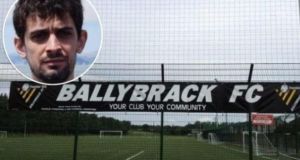 Fernando Nuno La Fuente said he found it “funny” to see his own death reported “because, basically, I’m not dead”.

The Leinster Senior League has sanctioned Dublin football club Ballybrack for bringing the game into disrepute for falsely reporting the death of a player to have an away fixture postponed.

The individual at the Dublin club who issued the false report about Spanish player Fernando Nuno La Fuente has also been sanctioned for bringing the game into disrepute, the league said.

In order to postpone a weekend game against Arklow, Ballybrack FC announced that Spanish native Fernando Nuno La Fuente, who had played with the club when he lived in Dublin, had died in a car accident last Thursday evening when he was in fact alive and well in Galway.

The league confirmed that the volunteer at Ballybrack who put out the false statement claiming that the Spaniard had died was no longer working with the south Co Dublin club.

In a statement after a disciplinary meeting with Ballybrack on Thursday night, the league said the club’s officials “admitted to not grasping the full impact of the incident, where they failed to fulfill a fixture against Arklow Town FC and they apologised for their part in that.”

Ballybrack FC were “open and transparent regarding an error made by a volunteer who no longer works with the club after he was removed from the senior team committee last Tuesday,” the league said.

“The league have ruled that sanctions, which match FAI rules, have been imposed on Ballybrack FC for failing to fulfill the fixture,” the statement said.

The club accepted all sanctions handed down by the league, which stopped short of removing the club from the league altogether.

Correspondence between the league and club would remain private, the league said, and it appealed to the media and the general public “to respect the privacy of the former club volunteer involved in the incident, who made an error that they had privately apologised for”.

Mr LaFuente told RTÉ this week that he found it “funny” to see his own death reported “because, basically, I’m not dead”. The club had contacted him, he said, before the false report to warn him that he might hear reports that he was involved in an accident.