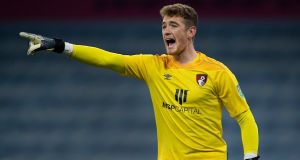 Mark Travers has joined Swindon Town from Bournemouth until the end of the season. File photograph: Getty Images

Republic of Ireland goalkeeper Mark Travers has joined Swindon Town from Bournemouth until the end of the season with the 21 year-old expected to make his debut in Saturday’s televised League One game at Ipswich.

Travers replaces Matej Kovar at the County Ground where the young Czech endured a difficult spell. Officially, Manchester United have cut the 20 year-old’s season long loan short but in reality all parties seem to have agreed that it was not working out well and the player acknowledged on social media that he had been disappointed with his own form.

Travers arrives in search of first team football after having had to settle for looking on as Asimir Bergovic started almost every game ahead of him this season at Bournemouth. The danger was that the club would keep him as cover but they too were keen to see him gain the experience he will get from playing more competitive football.

The Irishman will compete with 25 year-old Joe Fryer for the starting spot but the expectation is that he will be given the opportunity to nail it down.

Having made nine appearances for Bournemouth in all competitions and featured twice for the senior national team, Travers, though only 21, will have been keen to regain a bit of momentum, not least because of Caoimhin Kelleher’s recent progress at Liverpool.

His is likely to be tested at Swindon, though, with the club second from bottom in the table having only one two of the 11 games played since John Sheridan took over. The former international said recently that avoiding relegation was the priority for the season.

Dundalk have announced the appointment of their former player Stephen McDonnell as the club’s new academy manager. The 28 year-old local was forced to retire in his early 20s on health grounds but went on to manage Warrenpoint before taking up a role in the IFA where he worked with Dundalk’s recently appointed Director of Football Jim Magilton.

“This is an important appointment for the club,” said the Northern Ireland international as he announced McDonnell’s return to Oriel Park, “and it’s a step that we all felt needed to be taken.

“We want to create a pathway for all of the best players in Dundalk and the surrounding areas and develop them into top class, first-team players.

“I have known Stephen for a number of years and I have seen him work at the top end of the game and also at youth development level. I think this is the perfect appointment. He has a real connection and bond with the club and will undoubtedly help us with our aim to produce top-class players.”

Hope springs for Arsenal after comeback win at Leicester

5 Hope springs for Arsenal after comeback win at Leicester