All in the Game: When a want-away striker gets shirty

Signing Diego Maradona in January? And tell us what you really think Antonio Cassano 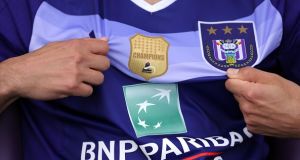 Royal Antwerp’s Didier Lamkel Ze turned up for training in the shirt of their biggest rivals - Anderlecht. Photograph: Getty Images

Apology of the Week

That would be the one issued by Antwerp’s Cameroonian striker Didier Lamkel Zé. “I sincerely apologise to the club and Antwerp supporters because they are wonderful fans who have always supported me. I reacted like that because my head was elsewhere with the transfer, it wasn’t easy for me. I’m so sorry for my actions. I hope to be in front of the supporters very soon on the pitch.”

What did he do? Well, he wants to leave the club during the transfer window, preferably for Panathinaikos, so, naturally enough, he turned up for training last week wearing the shirt of Antwerp’s not-very-beloved rivals Anderlecht. This would be a little like, say, Paul Pogba whistling ‘you’ll never walk alone’ while strolling in to Old Trafford.

Antwerp’s security people refused to allow Lamkel Zé in the door, holding it shut as he tried to tried to pull it open, so he went home, took to anti-social media and vowed to come back the next day in the shirt of Beerschot, another rival club. But then thought the better of it and issued his apology instead. Still, though, it all brings a whole new meaning to ‘want-away-striker’.

It was three years ago that Antonio Cassano, the former Italian international who has never been shy about expressing an opinion, found himself a little irked by all the plaudits being showered on Juventus man Paulo Dybala.

“He’s a fine player,” he said, “but he is being compared to Leo Messi - let’s not even joke about such things, please.”

The Argentinian’s contract with Juventus expires in June 2022 and with the club so far unwilling to meet his demands for a new deal, there’s a chance he could be on his way. Does Cassano think he’d be a major loss? Well . . .

“For me he is not a champion, he does not make the difference. If you want to take Juventus’ No 10 shirt, you have to be at a higher level. I have the feeling that, when they put pressure on him, he shits himself. And then he asks for €10m per season? Oh, please.”

Cassano, then, is being quite consistent with his view of the player. And consistency hasn’t always been a Cassano strength. (2010, when he joined AC Milan: “I’ve reached the top – there is nothing above AC Milan, only sky.” 2012, when he joined Inter Milan: “Yes, but above the sky there is Inter.”).

“Mbappe is a fantastic player but forward areas are not a position that Liverpool need strengthening in – but if he can play centre-back they should get him in January.” – John Barnes wondering if Kylian Mbappé might be a useful stopgap for the injured Virgil van Dijk.

“We played up front with nobody because we’ve not got anybody.” – West Brom manager Sam Allardyce explaining his 4-6-0 formation in the FA Cup defeat by Blackpool.

“Anyone who saw Van de Beek in the last Champions League match at RB Leipzig got the idea that he had not only forgotten how to play football, but also how to walk.” – Dutch pundit Valentijn Driessen suggesting that Donny has forgotten how to put one foot in front of the other since joining Manchester United.

“I don’t understand this sort of thing. A bit of emotion is fine in these situations, but this was completely over the top. Why on earth would you start crying?!” – Fabio Capello a touch aghast at Southampton boss Ralph Hasenhuttl’s tearful response to his side beating Liverpool.

“Telles has come in – but I’m not sure what Telles is.” – Paul Ince still trying to figure out what Manchester United’s Alex does for a living.

“We’ve never seen it as a negative thing. There are certainly clubs that would say, ‘Why do you see this as something positive?’ and I would say, ‘Better to have that kind of media attention than none at all!’.” – Tasmania Berlin chairman Almir Numic on his pride in the club’s record of of 31 consecutive games without a victory from the 1965-66 season - a record they maintained after Schalke ended their 30-game streak without a win on Saturday. Congrats Tasmania.

“I would like to have signed Maradona, but he’s dead.”

That’s how many managers Apoel Nicosia have had since 2015, so Mick McCarthy’s nine-game reign, which came to an end last week, was quite a lengthy one by their standards.