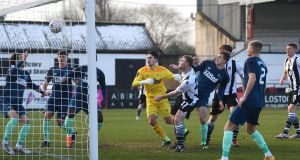 Non-league Chorley booked their place in the FA Cup fourth round for the first time with a 2-0 win over a youthful Derby side on a freezing afternoon at Victory Park.

The National League North outfit added the coronavirus-hit Sky Bet Championship club to their list of giant-killings, having knocked out 2013 winners Wigan in the first round before beating Peterborough.

Connor Hall headed the hosts in front in the 10th minute, which left Derby — with an average age of just 19 — facing an uphill battle, before Mike Calveley made sure of a place in Monday night’s draw with a close-range finish in the 84th minute.

League One Doncaster knocked out Blackburn after Taylor Richards’ goal just before half-time gave them a 1-0 win at Ewood Park. Non-league Boreham Wood are out after losing 2-0 at home to Millwall.

Kenneth Zohore put the Lions ahead against the National League side in the 31st minute, with Shaun Hutchinson heading in a second from a corner with 16 minutes left.

Sky Bet Championship leaders Norwich saw off Coventry 2-0 at Carrow Road, with both early goals coming in the space of 90 seconds. Kenny McLean put the Canaries in front in the sixth minute, with Jordan Hugill glancing in another swiftly afterwards.

Premier League strugglers Sheffield United got their first win in nearly six months after battling to a 3-2 victory at Bristol Rovers.

The Blades, bottom of the table with just two points, took the lead in the sixth minute when Lys Mousset’s header hit the bar and bounced in off Rovers keeper Joe Day for an own goal. Rovers defender Alfie Kilgour headed in an equaliser from a 21st-minute free-kick. Oliver Burke broke clear to put the Premier League side back in front in the 59th minute, but Max Ehmer levelled things up again from a corner just three minutes later.

Jayden Bogle, though, quickly put the Blades back in front after a slick passing move in the 63rd minute which proved enough for a belated, much-needed victory.

Championship promotion-chasers Bournemouth saw off Oldham 4-1 in a tie which had been switched to the Vitality Stadium because of the freezing conditions in Lancashire.

David Brooks (43) gave the Cherries the lead, but Dylan Bahamboula equalised from the penalty spot in first-half stoppage time. Rodrigo Riquelme (49) made it 2-1 and Joshua King (74) headed in a third, before slotting in a fourth with four minutes left.

Sheffield Wednesday won 2-0 at Exeter. Adam Reach fired the Owls ahead after a free-kick in the 27th minute, with Callum Paterson adding a second in the final minute.

Swansea also won 2-0 at Stevenage. Wayne Routledge headed the Championship promotion hopefuls in front in the seventh minute, with a header from Viktor Gyokeres wrapping things up five minutes into the second half. Stevenage saw a late penalty from Luke Norris saved.

Premier League side Leicester ran out 4-0 winners at Stoke. Left-back James Justin broke the deadlock with a fine finish in the 34th minute, and winger Marc Albrighton added a second just before the hour.

Championship strugglers Wycombe beat Preston 4-1 at Adams Park. Fred Onyedinma headed the home side in front after four minutes, with Joe Jacobson adding a second from the penalty spot five minutes later. Josh Knight knocked in a third from close range in the 25th minute. Emil Riis Jakobsen reduced the deficit with a penalty in the 43rd minute, with Wycombe substitute Alex Samuel (82) adding a late fourth.

League One Blackpool pulled off an upset against Premier League strugglers West Brom following a penalty shoot-out at Bloomfield Road.

Jerry Yates had put the hosts ahead in the first half following a swift break but Semi Ajayi pulled the Baggies level in the 52nd minute. Gary Madine had Blackpool back in front just after the hour, but Matheus Pereira’s penalty with 10 minutes left forced extra time.

Neither side could find a winner, and Blackpool went through to round four after winning the shoot-out 3-2 as goalkeeper Chris Maxwell pulled off a couple of saves.

Burnley were given a scare before coming through a penalty shoot-out 4-3 to beat MK Dons after the tie had ended 1-1 at Turf Moor.

Veteran striker Cameron Jerome gave the League One side the lead in the 29th minute, with Burnley denied a swift equaliser when James Tarkowski hit the post.

MK Dons defender Richard Keogh was shown a red card for deliberate handball just before half-time, only for referee Jon Moss to overturn his decision after checking the pitchside monitor.

Just when it looked like time had ran out, Matej Vydra equalised in stoppage time. MK Dons midfielder Ben Gladwin saw his 25-yard effort come back off the post, but the tie was to be settled from the penalty spot.

Vydra’s spot-kick was saved but Lasse Sorensen was denied by Burnley’s Will Norris who also kept out Gladwin’s penalty to help the Premier League side through.

In the 6pm kick-offs, League One Plymouth came from behind to win 3-2 at Huddersfield, while Brentford beat Championship rivals Middlesbrough 2-1, during which Boro winger Marcus Browne was taken off on a stretcher with what looked like a serious knee injury.