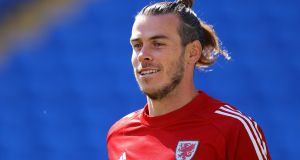 Gareth Bale: could be set for a return to White Hart Lane. Photo by Richard Heathcote/Getty Images

Tottenham are confident they will secure a deal to bring back Gareth Bale from Real Madrid and the hope is that it will be completed before the end of the week.

Talks are progressing well and it would be a significant surprise now if the Wales forward were not to return to the club where he played from 2007-13, though there are a number of contractual details that need to be finalised.

An understanding has been reached that Madrid will pay part of Bale’s wages, which amount to a basic of about £600,000 a week. The 31-year-old’s agent, Jonathan Barnett, told Sky on Wednesday: “There’s reason to believe a deal is close and things could move very quickly if discussions continue to go well. Without doubt Gareth is closer to leaving Madrid than at any time in the last seven years.”

Positive discussions were held after Barnett’s comments, with the Tottenham chairman, Daniel Levy, determined to find a way to make a deal happen. The likelihood is that it would be a one-year loan.

In other significant developments at Spurs, the club closed in on signing the Madrid left-back Sergio Reguilón in a £27.6m deal and José Mourinho omitted Dele Alli from the squad to face Lokomotiv Plovdiv in Bulgaria on Thursday, increasing doubts as to whether the attacking midfielder has a future under him.

Mourinho discussed on Wednesday his attempts to sign Bale at two of his previous clubs. He was on record in 2017 as saying he wanted to take him to Manchester United and he added that when he was the Real manager between 2010 and 2013 he also pushed for a deal. Bale would move from Spurs to Real in September 2013, just after Mourinho had left.

“I tried to sign him for Real Madrid which was not possible to do during my time there,” Mourinho said. “But the president followed my instinct and followed my knowledge and the season I left he brought Gareth to the club. There is no secret on that. Even Gareth knows that.”

Mourinho stonewalled questions on Bale’s latest proposed move, including one about whether he wanted him in his team. “I don’t comment on hypothetical stuff,” Mourinho said. “I’m not going to comment on Gareth Bale. He’s a Real Madrid player. I have to respect that.”

But as the club progress towards what would be a major statement, Mourinho made one of his own by dropping Alli for the Europa League second qualifying round tie.

Alli is not injured and Mourinho’s decision comes after he substituted him at half-time in the 1-0 home defeat against Everton last Sunday. Mourinho had started him in the No 10 role but said he was unhappy he did not do more in a creative sense. He criticised his players for failing to press properly, for bringing “lazy pressure up front” and, although he did not single out the 24-year-old, it was difficult to imagine he did not feel he was a part of the issue – given his position on the field.

Mourinho told Alli he was a lazy trainer when he first met him last season – as revealed in the All Or Nothing documentary – and, with the player struggling to recapture his best form in recent times, it has been possible to wonder whether the manager wants to get the player off the wage bill.

Spurs have spent £23m net in this window but deals for the 23-year-old Reguilón and Bale will further swell their outgoings, even if there is no fee involved for the latter. The club announced recently that they expect to lose £200m over 12 months because of coronavirus and they are open to trading a host of players.

Mourinho left it unclear as to whether he wanted Bale as much as Levy. But he was more forthcoming about plugging the gap in his squad at centre-forward, warming to the theme he drove last Friday when he made it clear another striker was a priority.

The manager made the point that Harry Kane would travel to Bulgaria and start, largely because the England captain is the only recognised centre-forward he has, which felt like a reminder to the board about the imperative to sign a striker.

Mourinho suggested the reliance on Kane at centre-forward was untenable, although perhaps Bale will be able to play in the position as well as in his more favoured role off the wing.

Mourinho said Kane would start against Plovdiv and at Southampton in the Premier League on Sunday and again the following Thursday in the next round of the Europa League if Spurs were still in the competition. It was put to Mourinho that this was a situation that could not go on. Spurs will play eight times in 18 days if they progress in the Europa League and Carabao Cup. “He cannot play every match for 90 minutes – that’s for sure,” Mourinho said. “This situation is an extreme situation for us.” - Guardian