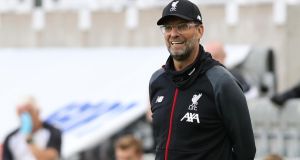 Graeme Souness thinks Jürgen Klopp needs to dip into the transfer market to build up his squad. Photograph: Owen Humphreys/AFP via Getty Images

Graeme Souness knows a thing or two about retaining titles from his playing days and he tips Liverpool, who bridged a 30-year gap to win the Premier League in the season completely recently, to successfully defend the trophy, albeit not in the same facile fashion.

The former Liverpool captain, who won five First Division titles, three European Cups and four League Cups during a seven-year tenure at the club (1978-1984) and is now a respected pundit did qualify his assertion on the basis that further activity in the transfer market could tilt the balance of probability when choosing the champions. The window closes on October 5th.

Souness asserted that Liverpool’s recruitment policy over the past four or five years has been superior to their rivals and would like to see a continuation of that policy of adding two or three players to the squad and allowing them time to settle into the environment without the pressure of having to be an instant success.

He used the example of Manchester United during Alex Ferguson’s time at the club, buying when strong to sustain the depth of quality and guarantee competition for places that ultimately drove the entire group.

Souness explained: “He [Jürgen Klopp] has the best back five out there, factoring in the keeper. Midfield could do with freshening up and back up for the front three, someone who can push them along; there’s nothing like competition for places to get that extra yard out of players,” said Souness, speaking during a Sky Sports event.

“We still have a bit to go in the window but you are looking at Liverpool, Man City, United, [who] I think will offer a challenge this year, and Chelsea. Roman Abramovich has been incredibly supportive of his manager, but Frank [Lampard] last year with the transfer embargo and with his legendary status there, got not a free pass, but there was absolutely zero criticism coming his way.

“The pressure starts on him for the very first time this season. Frank will know that. When you spend money, big money, that’s when everyone starts to take a close look at you.

“I think for Man United – I really like Donny van de Beek – they have to get their goalkeeping situation sorted out whether it’s [David] de Gea coming back to the form he had three, four, five years ago, or [Dean] Henderson ends up challenging him and edges him out.

“The back four has to do better for me. Up front I don’t think there’ll be a problem scoring goals. Donny van de Beek and [Bruno] Fernandes will help Paul Pogba and whoever else is playing there. Man City have to be more consistent and I expect them to be. [Liverpool] are still favourites, just with a bigger challenge coming from the other contenders.”

Souness doesn’t believe that the FA Cup winners Arsenal have the wherewithal to challenge. “I don’t think they’ll be in the top four. They could do some business [in terms of transfers but] I doubt it. I don’t think they have the budget to buy players who can make them a team that could get into the Champions League.”

From an Irish perspective Souness likes Matt Doherty as a player and feels that he will make the transition from Wolves to Spurs without having to compromise his attacking flair. He dismissed the notion that manager Jose Mourinho would stifle the player’s natural instincts.

“I haven’t worked with Jose but it’s a very simplistic view to point the finger at him and say he’s a negative coach. He isn’t. I think in the bigger games he’ll have a more pragmatic approach, but I think he tries to go on the front foot and go for it and I think Doherty will enjoy playing for him. He’s bought him because he sees him [getting from] box to box, delivers [and] chips in with a goal. There’s a lot to like about Doherty in the modern game in that system.”

Souness was also upbeat when discussing Jeff Hendrick signing for Newcastle United. “He will endear himself to supporters because he is all action. He is not someone who goes out and he is milky, relying on flicks and tricks. I can see him being liked by the supporters. If you work your socks off, you will be accepted up there and that is the sort of player he is.

“He is coming from a very different work place at Burnley to Newcastle. If it goes well he will have hero status within a month. They love their footballers up there. It is quite a special place to play football. Of course there is the opposite side of the coin, when it is not going well they are quick to show their disappointment. If it goes well he will absolutely love it there.”