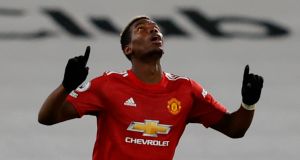 Ole Gunnar Solskjær paid tribute to Paul Pogba after the France midfielder helped restore Manchester United to the top of the Premier League at Fulham.

Pogba has morphed from problem to solution for the United manager in recent weeks and his stunning left footed winning goal in the 2-1 victory proved emblematic of an excellent all-round performance.

“Paul’s enjoying his football, he’s mentally very happy, he’s physically in very good shape and we know all about his talent,” Solskjær said. “I scored a couple of decent left-foot goals in my day but not one that good, not one from 25 yards into the top corner. It was a great goal.

“We’ve always said Paul Pogba can do everything, he can play wide, in central midfield, create chances and score goals. He’s really come on. The key was getting him match fit. Today he was in midfield and he was so committed and got tackles in as well as his goal.”

It lifted United two points clear of Manchester City and Leicester and six ahead of Liverpool at the top of the table, although City and the champions both have a game in hand in this tightest of title races.

Similarly fine margins held sway on the Craven Cottage pitch. Before Pogba undid Scott Parker’s side, United had been forced to come from behind in the wake of Ademola Lookman giving Fulham a fifth-minute lead. Despite Edinson Cavani equalising before half-time it was never an entirely straightforward win and even after United’s second goal the home substitute Aleksandar Mitrovic came close to a late equaliser.

“It’s never easy when you travel down here,” said Solskjær, who praised his side’s newfound resilience in winning a match they might easily have drawn last year. “We’ve shown a great improvement in our mentality and our physical robustness from last season. We needed to stop drawing and start winning and we’ve done that. But of course, when it’s just a one goal lead you’re heart is in your mouth.”

Not that he is contemplating a title celebration just yet. “We’re not thinking about it,” he said. “It’s such an unpredictable season. We don’t think about being top of the league; it’s just job done and on to the next game. It’s got to be one game at a time.”

Fulham remain stuck in 18th place but Parker still believes they can avoid relegation. “I’m disappointed but I’m also very, very proud of my players,” he said. “We need to get better and to learn to take our chances at big moments in games but we faced a team that are going to fight for the title this season and we went toe to toe with them.” – Guardian