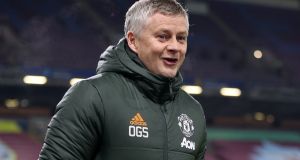 Ole Gunnar Solskjær does not expect any new arrivals before the end of the transfer window – but the Manchester United manager says some fringe players could leave.

The Old Trafford side were top of the Premier League at this stage of a season for the first time since Alex Ferguson retired, and also remain in the hunt for FA Cup and Europa League glory.

But Solskjær is not expecting any additional faces to boost United’s bid for silverware before the February 1st transfer deadline.

“I wouldn’t think so, no,” the Norwegian said. “I’d be surprised if we do any incomings. “The squad is strong, it’s full of quality. I still need to leave players out for the squad at times.

“Bar something surprising happening, I wouldn’t think something will happen [in terms of] incomings, no.”

United have brought in one new player this month but it remains to be seen when highly-rated Amad Diallo will be involved in a first-team matchday squad.

Asked if Diallo has the potential to be a long-term solution to United’s right wing issues, Solskjær said: “Well, that’s his preferred position. He’s clever at finding space. He can go inside and outside. He’ll get the time to prove that he is the one.

“Of course along the way we’ve got Mason [Greenwood], Marcus [Rashford] who’s played out there, Dan [James], Juan [Mata] so we’ve got options. Paul [Pogba] has played there but I think when you look at the squad and you look at Amad you think yeah, that’s probably where we’re going to work to fit you in.”

Solskjær says it will not too long until Diallo is involved, but fellow teenager Facundo Pellistri looks set to leave to get some much-needed first-team experience.

“There has been talks and there’s been quite a few clubs interested in Facundo to go out on loan and that’s maybe something we will let him do now,” Solskjær said of the 19-year-old, who has yet to make his debut since leaving Penarol for £9m (€10.1m) in October.

“He’s had a few games in the reserves. We want him to have regular football, of course, at a high level of course. With Amad, I think it’s a different scenario. He’s just come in, he’s going through a good training regime and training programme and he’s doing well. It won’t be too long, I feel, before I can bring him into the squad.”

In terms of outgoings, Timothy Fosu-Mensah has already this month completed a permanent move to Bayer Leverkusen and Odion Ighalo’s loan from Shanghai Shenhua expires on January 30th.

Marcos Rojo and Sergio Romero have been told their deals will not be extended beyond the summer, while home-grown full-back Brandon Williams has been linked with a temporary exit in search of first-team minutes.

It is understood that there has been interest from home and abroad in a loan deal for Jesse Lingard, with a switch to West Ham reportedly in the offing for the out-of-favour England international.

Asked about the situation with Williams and Lingard, Solskjaer said: “They’re still part of the club, part of the squad, training well. No deal has been struck for any of the players yet going out – still a little period left, of course. There’s been many clubs interested in our players, so let’s see what happens.

“For me, it’s also important to take our wishes and our plans into consideration but also the players of course, because they are Man United people and players through and through.”

Meanwhile, Solskjær has urged Mason Greenwood to “kick on” following his goal against Liverpool after the Manchester United forward failed to do so when last scoring two months ago.

The 19-year-old’s equaliser in Sunday’s 3-2 FA Cup win over the champions was only a fourth of the campaign. This followed a standout contribution of 17 last season, the joint-highest by a United teenager.

Greenwood was sent home by England from Iceland in September along with Manchester City’s Phil Foden after they invited two women to the team hotel, in breach of Covid rules. He has also suffered from illness.

Solskjær was asked whether Sunday’s strike – a first since the 3-1 win at West Ham on December 5th – might fire up Greenwood again. “We think Mason is going to be very important in second half of the season but it’s not just going happen by itself,” the manager said. “He scored against West Ham a while back as well and was expected to kick on.

“He’s taken steps, he’s grown, he’s more mature and he’s been training with Edinson Cavani for half a season, he’s learning good habits, and whoever doesn’t learn from players like him, or Bruno [Fernandes] or [any of] the players we’ve brought in that’s a pity. I’m very confident that Mason will chip in good performances and with goals and assists.”

Rashford is available for Sheffield United’s visit on Wednesday after he suffered a knee injury against Liverpool. “He trained this morning – he tweaked his knee a little bit but trained fully,” Solskjær said.

The Norwegian is yet to open talks regarding fresh terms to continue as manager, his contract expiring in summer 2022. “We haven’t had any discussions yet; for me just keep on doing my job as well as I can,” he said.