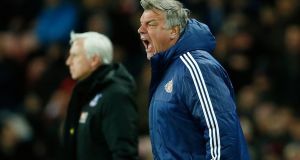 Sam Allardyce is set to formalise his return to soccer at Crystal Palace in the next 24 hours, following his ill-fated 67-day stint as England manager. The struggling Premier League club is seeking to make a swift appointment after the sacking of Alan Pardew.

Palace reluctantly dismissed Pardew on Thursday after almost two years in charge, with the team having lost eight of their past 10 league games, and 22 over the calendar year, to slump to within a point of the relegation zone. Allardyce, who departed his position with the English Football Association in September after one only match, having been filmed by undercover reporters discussing FA rules on third-party ownership, was in talks with his representative and the club’s chairman, Steve Parish, on Thursday evening.

It is understood that agreement has been reached in principle on a contract set to run to 2019, with a break clause stipulated in 18 months’ time. The 62-year-old Allardyce has made clear his desire to return to club management.

Although Pardew had anticipated overseeing Palace’s game at Watford on St Stephen’s Day, the club’s hierarchy appears to have wielded the axe for fear that they might miss out on Allardyce, who had fielded tentative interest from clubs in China and agents claiming to work on behalf of Swansea City over the past few weeks.

“I think [I will return], probably in the new year, if not before, depending on who approaches me,” Allardyce told beIN Sports last week. “I don’t think I can leave it where it ended.”

The possibility of losing out on a manager who has never been relegated from the top flight appears to have prompted Palace, whose players were granted a day off on Thursday, to act before the Christmas programme. The American major shareholders, David Blitzer and Josh Harris, who each purchased an 18 per cent stake in the club a year ago, had grown increasingly alarmed at the team’s slump in form, which was threatening their considerable investment.

They had been made aware of Allardyce’s credentials some time ago. Indeed, it is understood they had been sent a dossier offering detailed analysis of the club’s squad, with assessments of each player, towards the end of last month, while Palace were embroiled in a six-match losing streak that culminated in a calamitous 5-4 defeat at Swansea on November 26th. Allardyce had questioned the team’s fitness and had also indicated what he felt would need to be done in the January transfer window – when Palace had hoped to add the Leeds left-back Charlie Taylor to their ranks – to instigate a revival. He would seek to bring in his own backroom staff, including Sammy Lee as an assistant and new fitness coaches and analysts.

The American co-owners were increasingly swayed, but Pardew retained the support of Parish until very recently and appeared to have bought himself some time by gleaning four points from games with Southampton and Hull, for all that the revival was choked by losses to Manchester United and Chelsea last week. His decision-making during games had been called into question in the first of those defeats, but he still attended the club’s Christmas party at London’s Quaglino’s restaurant on Tuesday, and was due to face the media before continuing preparations for the Watford game on Friday.

Instead, he was summoned to a meeting at Palace’s office in Soho on Thursday morning and was informed his time was up.

“Relegation is so costly and I feel, with no blame attached, we got ourselves in a rut and need a change,” Parish told the BBC. “We hope a change will change things. We all bought into the decision to play a more expansive style of football. We all believed in it. That hasn’t worked. It’s no one’s fault. The players have been running their socks off for Alan, the spirit is good. But now we’re going to wind the dial back the other way.”

There had been support within the Palace hierarchy for Chris Coleman – though no formal approach was made to the Football Association of Wales – and Roy Hodgson and Roberto Mancini had also been mentioned. Yet Allardyce’s track record appears to have been key, particularly in convincing Harris and Blitzer, given his achievements in steering Bolton and, more latterly, West Ham and Sunderland to Premier League survival.

Although the FA is still waiting to conduct its own investigation into its former manager’s conduct during his brief tenure with the national side – the relevant evidence has yet to be passed over by the City of London Police, who have confirmed that Allardyce is not the subject of a criminal investigation – there is nothing to prevent him taking up the reins of a club side again immediately. Allardyce would inherit arguably the strongest squad in Palace’s history, with money to add to his options next month and a trip to Arsenal on New Year’s Day to follow that to Vicarage Road next Monday.

Pardew’s payoff is believed to be an initial £2.5 million (€2.9 million), but he will effectively be paid his basic salary (up to a cap) until he takes another position in the future.

“I would just like to take the opportunity to thank everybody at Crystal Palace for their fantastic support,” he said in a statement. “In particular, a big thanks to the players, who gave me absolutely everything, and Steve Parish and his board. Personally I have a lot of good feelings for this football club and am sad that my time there has ended. I feel that I have a special bond with the club and hope that hasn’t been affected.”

His assistant, Keith Millen, is expected to take training today and could yet be placed in caretaker charge for a fourth time at the club for next week’s fixture.

1 Born to ride, born to win: Sam Bennett, the making of a green machine
2 Leinster look ready to step things up and burn off Saracens challenge
3 Will 'Porridge' Connors now delivering on his massive potential
4 Keith Duggan: Surreal story of John Delaney needs to act as a wake-up call for FAI
5 Let’s face it, Saracens don’t really care that they are rugby’s most hated team
Real news has value SUBSCRIBE