Joey Barton back at Burnley and in the last-chance saloon 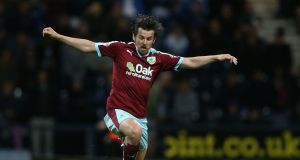 Joey Barton will sign for Burnley on a deal until the end of the season. Photograph: Martin Rickett/PA Wire.

The announcement that Joey Barton is to be re-signed by Burnley in January heralds the beginning of a new chapter in the colourful life of a footballer whose most significant contributions since leaving the club for Rangers last summer have come in literary, rather than football form.

Towards the end of No Nonsense: The Autobiography, his interesting collaboration with the journalist Michael Calvin, Barton announced his intention to win the Scottish Premiership with Rangers, a bold but commendable claim that has been rendered ludicrous by his fractious and protracted departure from Ibrox.

Having passed up the offer of a two-year contract with Burnley in favour of a new challenge in Scotland, Barton arrived in Glasgow to great fanfare, much of it generated by himself as he announced his intention to become the best player in Scottish football. Following eight largely underwhelming appearances for the club (the last of them a 5-1 shellacking at the hands of Celtic in his first Old Firm game), one training-ground bust-up and a spot of bother involving him betting on various football matches in which he was not involved, he parted company with the club.

Of course big decisions do not always work out and it was no great shock to see such an outspoken, high-maintenance player fall out with the club hierarchy, but the alarming frequency with which Barton’s decisions tend not to work out had been well documented long before he sat down with Calvin to give his own version of his myriad misadventures on and off the field.

Aged 34, with the slate once again wiped clean, he now sits on a stool in the last-chance saloon.

In a career spanning six clubs in three countries across 15 years, Barton’s move to Rangers was the only one that can be considered an unmitigated disaster and it seems appropriate that he will be given the opportunity to rehabilitate his reputation as a footballer at the club where perhaps he made arguably his greatest contributions.

As part of a two-man midfield, Barton made 40 appearances for Burnley as they won the Championship title in 2016, playing well enough to be voted on to a ferociously competitive division’s team of the season. He might not be as good a player as he thinks he is but neither is he anywhere near as bad as his many detractors would have us believe. Having failed to make any sort of impression in Scotland’s top flight, one wonders whether or not he can still hack it in the Premier League after an absence of one and a half seasons.

In Sean Dyche, at least, Barton appears to have found something of a likeminded soulmate, whom he claims was the main reason he originally joined Burnley from Queens Park Rangers. “He accepted me as the finished article, the older, wiser person I have always wanted to be in the dressing room,” says Barton in a book that was fiercely critical of some of his other former managers. “I responded to him as one of the few managers I felt was a friend.”

In the workplace, the pair’s relationship certainly seems to be one of mutual respect and neither Dyche nor his other players seem to have minded Barton regularly assuming the role of de facto manager in dressing-room team talks.

It will be intriguing to see how Barton fares on his return to the English top flight. Despite having been training with Burnley since leaving Glasgow he has not played a competitive match since early September, even if some might feel such a description of Rangers’ defeat at the hands of Celtic extremely charitable.

Although the added steel he brings to midfield would be of benefit to any team in a relegation scrap, there will inevitably be concerns that a player in the twilight years of his career, chucked into the hurly-burly of the Premier League in mid-season after so long on the sidelines, may initially at least find that games are passing him by.

Barton, for all his well-documented shortcomings, has never been short of self-confidence and will certainly back himself to come back with a bang. During his first spell with Burnley he was given a month to work on his fitness after missing pre-season training and was rarely found wanting after being given his first start in October 2015.

In his book he claims to have told Burnley’s younger players that age is no more than a state of mind, a number. “My prime attributes, awareness, application and competitiveness, are more enduring,” he writes. “So many players are done when they lose even a fraction of their pace; I’m fortunate because I’ve never had any to lose.”

After the ill-advised self-promotion with which he trumpeted his arrival in Scotland, it is the kind of pragmatic approach which should serve Barton well on his return to Turf Moor. Guardian service

Tiger Woods and Peyton Manning hold their nerve in $20m Covid-19 charity match 07:10
Argentina rugby great Hugo Porta continues to give back to his beloved game 07:00
George Kruis leaves the door open as he prepares to depart Saracens 06:35
TV View: Not every day a Tesco delivery disrupts a Bundesliga broadcast 06:30
Ken Early: Liverpool fans, Bamber Gascoigne and a close shave in Istanbul 06:00

1 As news gets better, can the pull of The Field be resisted?
2 Tiger Woods and Peyton Manning hold their nerve in $20m Covid-19 charity match
3 Ken Early: Liverpool fans, Bamber Gascoigne and a close shave in Istanbul
4 Sideline Cut: Vignette shows why Bird is the true shark in The Last Dance
5 George Kruis leaves the door open as he prepares to depart Saracens
Real news has value SUBSCRIBE