Sports Review of 2016: Ken Early looks back at the major failings of Euro 2016 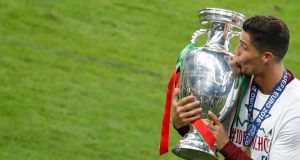 The first European Championships I remember was West Germany 1988. I was nine. Ireland beat England, which I understood from the reactions of the adults around me was a big deal. What I was really interested in was Ruud Gullit, who, my grandfather told me as we watched Holland lose to the Soviet Union, was the most expensive player in the world. I loved Gullit’s massive dreads that made his header in the final look like the most powerful header of all time. The other thing that impressed me was the fact that Ireland could play against the Soviet Union and not lose.

I thought this was a big deal because of the map on the wall in my bedroom, in which Ireland was just a little green blob, and the USSR a colossal red mass that seemed to cover half the world. (I didn’t know then about the tricks of the Mercator projection).

For some 1980s reason, that map also illustrated the extent of nuclear stockpiles in various countries. The USSR bristled with ballistic missiles, as did the United States, western and central Europe, Turkey and other places. So I had an awareness that the world was split into two opposing sides without any understanding of why this was so. But I understood the purpose of the missiles. My father had given me a video of the animated movie When The Wind Blows, probably thinking it was a kid’s cartoon along the lines of The Wind in the Willows. It turned out to be the story of an elderly British couple who survive a nuclear attack only to die slowly of radiation poisoning.

Who were these Soviets who wanted for some reason to kill us? The first Soviet person I had come across was probably Nikita from the video of Elton John’s 1985 hit. Nikita was a woman in the video, though I later found out it’s a man’s name. I was vaguely aware of Mikhail Gorbachev, a regular character on Spitting Image. And of course they were generally the bad guys in the movies of that time. But watching the Soviet football team in Euro ’88 was my first introduction to actual Soviets.

As I watched their football players, the notion of the Soviet Union rapidly grew less alien and hostile. They were like our guys, with sillier hairstyles and more complicated names. I learned the names: Protasov, Dasaev, Belanov, and my favourite one, Mikhailichenko. I also liked the random string of letters across the front of their shirts. I asked about it and it turned out that CCCP was how Russians wrote USSR. So that was how I learned that the Russians had a different alphabet.

I can see now that my entire idea of Europe was being shaped by watching these football teams, and not just in the sense of clarifying minor factual points, like the fact that “Holland” and “the Netherlands” refer to the same country.

In the context of Euro ’88 it was natural to think of the countries of Europe as friends, equals, plainly all part of the same big thing. What then was the point of all these missiles? The next year the Berlin Wall came down; reunited Germans from West and East hugged and cried. To a 10-year-old the coming together of Europe seemed perfectly simple and obvious and natural. It made intuitive sense that the story of the world would inevitably curve towards a happy ending.

I guess today even 10-year-olds don’t think like that any more. When I think now about Euro 2016 the image that comes to mind is the crouching shadow of a Russian hooligan, sharply outlined in the early afternoon sunshine and recorded in his personal GoPro footage, as he advanced in a low-slung martial arts stance past the stalls and cafe terraces, hunting for unsuspecting people to beat up. The guy looked like he might have spent time in what Russians like to call the Donbass, where one of the hosts of Euro 2012 was fighting a war against another Euro 2012 participating nation, football having mysteriously failed to united them in peace.

The Euros in France was characterised by a pervasive ambient dread. There were heavily armed soldiers and policeman patrolling the corners, little more than scarecrows really, amulets put there to reassure as much as to deter or prevent. There were people apologetically asking to see what was in your bag whenever you walked into a shopping centre or train station.

There was the brutal murder of an MP by an English neo-Nazi and then the Brexit, a stunning explosion of anger and resentment that seemed to repudiate the very notion of conciliation. At the end, there was only relief that nothing terrible had happened to disfigure the tournament itself.

And just at that moment of exhalation, the horrible massacre on the promenade in Nice. In normal times sport feels like a welcome diversion, a holiday from real life. In 2016 it just felt like a waste of time.