Premier Division reduced to 10 teams for start of 2018 season 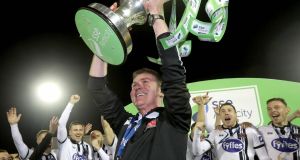 Dundalk will begin the defence of their title at home to Shamrock Rovers. Photograph: Ryan Byrne/Inpho

It is, as that old gag goes, a case of déjà vu all over again.

Five years on from their last attempt at a 10-team Premier Division was abandoned, the FAI has confirmed that the top flight will again be slimmed down from 12 to 10 in time for the 2018 season. There will no playoffs next season with three sides to be relegated and just one going up from the First Division.

Confirmation of the move, which was reported last week in The Irish Times, marks a victory for the league’s bigger clubs who have long felt they are being held back by weaker outfits and will see the change as having the potential to boost gate receipts.

They did not, as it happens, face much opposition from First Division outfits, who appear not to have been formally consulted and did not react in any significant way to informal suggestions from Abbotstown that they might do well to make their collective voice heard.

Instead, it is a vote with the Premier Clubs Alliance (PCA) that has essentially prompted the association to implement one of the headline recommendations of last year’s Conroy report. Even within the PCA, though, there are significant differences over this and other issues, as well as more generalised rivalries.

It was, in short, a less than ideal process, although the gulf between some of the clubs over how best to proceed probably means that a consensus can simply never be reached.

Despite that, though, some the First Division clubs do believe there is something in this reorganisation for them, with the return of a 10-team First Division (by way of two stronger sides being added) potentially making that league more competitive.

The mechanics of the new 10-team top flight have yet to be worked out, with discussions still ongoing. Conroy recommended a split between the top and bottom five part of the way into the season but there is significant opposition to this and it is far from clear whether it will be re-adopted given that it was not a success when it was tried before.

Clubs will inevitably be anxious about finding themselves in the wrong half of the table, as St Patrick’s Athletic did after supporting the move last time around.

In its statement announcing the change, the association said that it would meet again with the PCA on January 16th to discuss the outstanding issues.

There remains a sense, though, that there is a bit of shuffling deckchairs about yet another change of league structure if it is not accompanied by substantial investment, much of which would have to come from the FAI.

It points to the fact that it will be appointing a new marketing manager for the league soon and insists that it remains supportive in other ways. However, many of the PCA clubs remain deeply unhappy about the way the league is run, the restrictive nature of the participation agreement they are obliged to sign and the amount of funding that comes out of Abbotstown.

Some progress may be made on those issues by the time Michael Cush SC exits the negotiating process over the coming months but it seems unlikely the clubs will achieve the levels of transparency he had hoped to win them. Nor is there any sign the association is going to stump up cash at anything like the rate they would like, despite the widely claimed improvement in its finances.

There are more run-of-the-mill gripes about the day-to-day running of the league to be dealt with, as was highlighted when the fixtures from next season were released on Thursday.

There is the usual pattern of carefully choreographed fixtures aimed at generating excitement at key times and certainly the visit of a radically different looking Shamrock Rovers to Oriel Park on the first night of the new campaign should attract interest.

Less impressive, though, is the scheduling of the first encounter next season between Cork City and Dundalk, which is due to take place at Turner’s Cross on Saturday, March 25th, some 24 hours after Ireland play Wales at the Aviva Stadium in a World Cup qualifier that is certain to overshadow it.