James McCarthy out for 2-3 weeks with hamstring injury 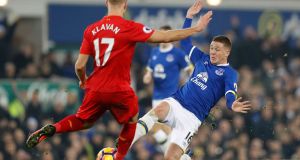 Ronald Koeman has confirmed Republic of Ireland international midfielder James McCarthy will be sidelined for two to three weeks with the hamstring injury suffered in the defeat by Liverpool on Monday.

“James has a slight hamstring again and that is bad news because he was doing well,” Koeman said. “I am a little bit worried about a lot of these kind of injuries for him. It’s a medical question to see what we can do but we want more consistency in his game time – that’s most important.”

Koeman, meanwhile, has described Romelu Lukaku’s willingness to sign a new contract at Everton as a reflection of the club’s ambition despite uncertainty over the striker’s long-term future.

Lukaku’s agent, Mino Raiola, said on Wednesday that the terms of a new deal are 99.9 per cent agreed but his client’s position will be reassessed at the end of the season. The 23-year-old, who has two and a half years remaining on his existing contract, is expected to receive improved terms of around £100,000 (€118,000) a week and the new deal may not include a break clause. Regardless of the summer, Koeman believes the Belgium forward is in keeping with the level of talent Everton want to bring to the club.

“It’s a big deal because the club is showing it wants to keep its best players and doing everything to do that,” the Everton manager said. “You never know what can happen in a year in football but at least it’s an understanding that the boy likes to stay.

“He’s a big part of our future. We know what can happen but that’s football in general – players sign new contracts but don’t always stay to the end of it. If the new deal is done that is a good thing.”

Everton expect to be active in the January transfer window and Koeman believes the Lukaku deal will fit with the club’s long-term aims.

He said: “We spoke about this being a project and it has started but is still not finished. It’s a difficult time but I knew that before. I wasn’t expecting good news or results every day.

“We know what we need to do to improve. It’s difficult but every job in every club in the Premier League is difficult. Everything can change very quickly. I see a big difference around the club in what has happened already, it is like two years at Southampton. ”

The goalkeeper Maarten Stekelenburg, who was forced out of the derby with a dead leg, is a doubt for the St Stephen’s Day game at the champions, Leicester City. Guardian service