Andy Woodward ‘hurt’ police have yet to contact him over allegations

‘I suffered more than one abuser. I need to let go of that pain’ - Woodward’s takes to Twitter 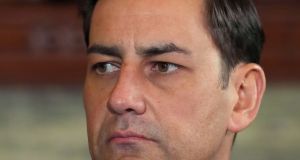 Former footballer Andy Woodward has said he is “still waiting” to provide police with information about the alleged sexual abuse he suffered as a junior player. Photograph: Peter Byrne/PA

Former footballer Andy Woodward has said he is “still waiting” to provide police with information about the alleged sexual abuse he suffered as a junior player.

It comes as new figures from Operation Hydrant, the UK-wide police investigation into historical child sex abuse, revealed the growing scale of the scandal engulfing the world of football.

Some 429 victims — aged between four and 20 — have been identified by police along with 155 potential suspects, the National Police Chiefs’ Council (NPCC) said on Wednesday.

Mr Woodward, who played for teams including Bury, Crewe Alexandra and Sheffield United, rocked football last month when he went public with claims he was sexually abused as a boy in the 1980s.

His disclosure — in which he waived the right to anonymity given to alleged victims of sexual offences — prompted a tide of similar complaints.

In a series of social media posts on Wednesday night, Mr Woodward said he was “hurt” police had not made contact with him and also revealed that he had been abused by more than one person.

The 43-year-old wrote on Twitter: “I’ve now been waiting 5 weeks to provide my statement with the police for further abuse on me. I’ve not mentioned it before now but it hurts.

“I’ve kept quiet about it but now people should know i suffered more than one abuser. I need to let go of that pain yet still waiting.”

Operation Hydrant has received 819 referrals from police forces and the NSPCC and a total of 148 football clubs spanning all tiers of the game have been “impacted”, the NPCC said.

The latest figures mark a significant rise from the last update on December 9th, when there were 98 clubs impacted, 83 potential suspects and 639 referrals to the investigation.

It has also emerged that the NSPCC’s hotline for those affected by historical sex abuse in football received more than 1,700 calls in three weeks.

Chief Constable Simon Bailey said in a statement on the NPCC website: “Allegations received by police forces across the country are being swiftly acted upon.

“We continue to urge anyone who may have been a victim of child sexual abuse to report it by dialling 101, or contacting the dedicated NSPCC helpline, regardless of how long ago the abuse may have taken place.

“We will listen and treat all reports sensitively and seriously. Anyone with any information regarding child sexual abuse is also urged to come forward.”

However, Mr Bailey acknowledged that the “higher than usual” number of calls was causing delays.