Nathan Redmond explains what Pep Guardiola said to him

‘When one of the world’s best managers compliments you or gives advice, you listen’ 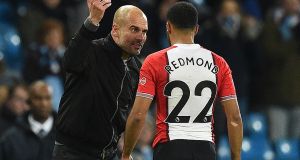 Nathan Redmond has defended Pep Guardiola following their on-field altercation at the Etihad Stadium on Wednesday.

The Southampton winger was confronted by the Manchester City manager immediately after City’s 2-1 win. Redmond issued a statement on Twitter in response to growing media speculation, confirming “nothing negative or offensive was said”.

“Guardiola commented on my qualities as a young English player and how we wanted me to attack his team more during the game, in a similar way to last season,” Redmond said. The 23-year-old scored the opening goal in a 1-1 draw at the Etihad in October 2016.

“I told him I was doing what my manager had asked me to do in the game. That’s it. Nothing more, nothing less. Nothing negative or offensive was said towards me from Pep and that’s what makes him one of the best managers in world football.”

Redmond posted the statement in response to an article published on the Sun’s website, which featured a lip reader claiming Guardiola had called Redmond a “wanker” and had accused him of “taking me for a mug”. A Manchester City spokesperson disputed the lip reader’s claims.

“I want to make it absolutely clear Pep Guardiola did not say what the Sun is falsely claiming in this story,” Redmond said. “Yes he was very passionate, intense and aggressive but he was only very complimentary and positive to me.

“Losing the game the way we did in the last kick of the game after working so hard for 90-plus minutes, I was very disappointed. But when one of the world’s best managers compliments you or gives advice in any way, you listen.”

Redmond’s comments support Guardiola’s version of events, with the manager insisting he had not been critical of Redmond in their animated conversation. “(I told him) how good a player he is,” Guardiola said. “Last season he destroyed us here. I didn’t know him last season, I realised how good he is.”

Guardiola admitted frustration that Southampton “didn’t want to play” and “were time wasting from the ninth minute”.

Mauricio Pellegrino’s side looked set to earn a point after Oriel Romeu’s equaliser, before Raheem Sterling struck a dramatic winner in the 96th minute.