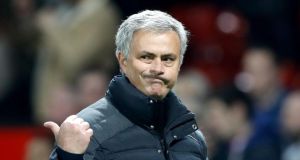 Manchester United have no concerns that José Mourinho could leave next summer to take up another managerial position, and those who work closely with him believe he retains fire in his belly to win the Premier League for the club.

Mourinho is a long-term target of Paris Saint-Germain, whom he publicly praised last month, and would also attract interest from other leading sides. However, United’s board would welcome Mourinho staying for a decade or more, as this would mean a long period of success had been established.

Manchester United are second in the Premier League, eight points behind Manchester City. Before the international break United lost 1-0 at Chelsea, their second league defeat of the opening 11 matches. The first was the shock 2-1 loss at Huddersfield Town on October 21st.

In the week of that game Mourinho caused some surprise by praising “special” PSG and ruling out spending the remainder of his career at United. This came despite him telling The Guardian during the team’s summer tour of the US: “I am ready for the next 15 [years], I would say. Here? Yes, why not?”

However, there is no concern among the United hierarchy that a manager whose longest spell at a club was just over three seasons during his first Chelsea tenure will depart in the close season. They feel he is energised by the challenge of managing United, who yesterday announced record turnover of £141 million for the third quarter of 2017, and by trying to claim the club’s first Premier League title since Alex Ferguson retired in May 2013.

The manager believes Luke Shaw has a future at United even though the left-back has played only twice this season – as a substitute in League Cup ties against Burton Albion and Swansea City. Shaw has made only 20 appearances under Mourinho, though he did suffer ankle ligament damage in April that ruled him out of the end of last season and the start of this.

Shaw has not been named among the substitutes for some matches this term, but Mourinho is hopeful the 22-year-old can fight his way back into contention.

He is one of five players, with Ander Herrera, Juan Mata, Ashley Young and Daley Blind, who are expected to have extra-year extension clauses in their contracts triggered by the club to take them to summer 2019. Zlatan Ibrahimovic and Michael Carrick are the other players whose contracts are due to end in the close season.

United offered no indication of what funds will be available to Mourinho in January as the club announced record financial results. The latest set of accounts, published on Thursday, which cover the quarter ending September 30th, showed the club brought in total revenue of £141 million. That represented a 17 per cent increase on the £120.2million figure recorded for the same period last year. – Guardian