Basel to replace pitch ahead of United tie

Pitch cut up badly during Northern Ireland’s playoff against Switzerland 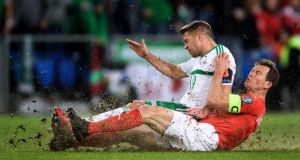 Basel are to replace the pitch on which Northern Ireland’s World Cup hopes were shattered because of the damage sustained on a wet night in Switzerland.

Manchester United will be paying particular attention as it means they will be playing on a pitch just a week old when they arrive at St Jakob-Park for their Champions League tie next Wednesday.

Heavy rain in the build-up to Sunday’s goalless draw, which saw the hosts book their place in next summer’s tournament courtesy of a controversial first-leg penalty, meant the match was in some doubt leading up to kick-off.

It went ahead but the boggy surface did not do either side any favours with the pitch cutting up and restricting the speed of the ball.

The club have decided it is so bad their only option is to relay it ahead of Saturday’s visit of Sion, with United to follow four days later.

“Following heavy rainfall and the damage sustained during yesterday’s FIFAWorldCup playoff game between #SUINIR, the pitch at St. Jakob-Park will have to be replaced ahead of Saturday’s league game and the #UCL game coming week against ManUtd,” said a statement on Basel’s Twitter account.

Northern Ireland midfielder George Saville voiced his criticism on the state of the pitch after the final whistle on Sunday.

“For me, the pitch was disgraceful, I’ll be honest with you. I think it was shocking. For a game of this magnitude, this level, to play on a pitch like that I think it’s unacceptable, personally,” he said.

“We’re not using that as an excuse or blaming the conditions. We both got dealt the same cards and you get on with it.”