FAI lose out on over €8m World Cup windfall 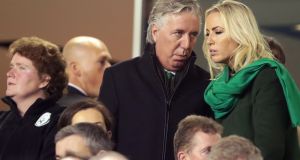 FAI chief executive John Delaney at the Ireland-Denmark game. The association would have been guaranteed about €6.8 million in prize money for participating at the tournament. Photograph: Morgan Treacy/Inpho

Ireland’s defeat to Denmark on Tuesday night represents a significant blow to the FAI as it continues its long-running battle to clear the huge burden of debt that came with the construction of the Aviva Stadium. The association would have been guaranteed about €6.8 million in prize money for participating at the tournament plus a further €1.3 million in funding to help with preparation for the event.

The rewards for getting through the group stages have been increased substantially for Russia with progress to the first knockout stage bringing with it a further €3.4 million with each additional round after that earning an association between €1.7 million and €2.5 million.

Had Martin O’Neill managed to guide his side out of their group, which is likely to have been regarded as a reasonable target out at Abbotstown, the subsequent payment from Fifa would have been more or less equivalent to that received from Uefa for Ireland’s participation at Euro 2016 in France.

The association’s financial returns for last year suggested, however, that a substantial portion of the money received on that occasion, was paid out in costs and bonuses to players and members of the management team. Those items may well have accounted for a similar proportion of direct World Cup revenue.

There would, however, be important other revenue streams with bonuses from sponsors likely to comfortably exceed €1 million and additional ticket revenues for games at the Aviva or fees for playing abroad also have been expected to bring in large amounts. As it is, the team’s games in the spring and early summer are likely to be fairly low-key affairs.

Ireland’s next competitive games will be in September when the team will compete in the inaugural Nations League, a somewhat convoluted competition intended to add a greater element of competitiveness to what would traditionally have been friendly dates.

The draw takes place on January 24th when O’Neill’s side, assuming that is still what it is, will be placed in a three-team group with two of the following: Austria, Wales, Russia, Slovakia, Sweden, Ukraine, Bosnia and Herzegovina, Northern Ireland, Denmark, Czech Republic or Turkey.

Group winners will win promotion and so compete in the next edition of the competition with Europe’s strongest sides but, more immediately, the four highest ranked teams from each of the four divisions that do not secure a place at Euro 2020 through the normal qualification process will then play-off for four places.

Under the new system only 20 of the 24 finalists will come from group qualifying with the remaining four being produced by the Nations League play-offs. Had the system applied in 2016, Ireland would have had to secure a place through these play-offs as O’Neill’s side would have missed out initially.