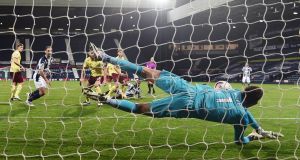 Nick Pope of Burnley makes a save during the Premier League match between West Bromwich Albion and Burnley at The Hawthorns. Photo: Laurence Griffiths/Getty Images

Perhaps it was inevitable that a game broadcast by Sky Sports Box Office would throw up the Premier League’s first goalless draw this season. The match, available to watch on a pay-per-view channel, may have failed to live up to its teatime billing but Nick Pope made a string of superb saves to prevent West Bromwich Albion from earning their first win of the season and help Burnley stop the rot and claim their first point of the campaign. Karlan Grant also had a first-half goal disallowed on debut after straying offside.

Both these teams craved three points to get up and running having endured a difficult start to the season. Encouraged by aspects of his side’s second-half display at Southampton, Bilic implemented a three-man midfield from the off here, handing the Chelsea loanee Conor Gallagher his Premier League debut and Grant his first start since a protracted £15m move. But having leaked goals for fun – West Brom had conceded 13 in their opening four matches – it was at the other end where Bilic made wholesale changes, with the veteran Branislav Ivanovic partnering Ahmed Hegazi in defence; Ivanovic impressed on his first Premier League outing since December 2016.

Dyche, whose only major close-season signing was a £1.5m deal for Dale Stephens, who fell down the pecking order at Brighton, did not have the luxury of making six changes but was forced into one after Phil Bardsley returned a positive coronavirus test. Johan Berg Gudmonsson also returned to the starting lineup, allowing the exuberant Josh Brownhill to roam from central midfield. But Burnley’s primary outlet was the superb Dwight McNeil, a direct runner who kept the West Brom full-back Darnell Furlong, among others, on their toes. Towards the end of the first half McNeil showed great feet to jink away from Jake Livermore on halfway before flashing a delicious ball across the six-yard box. It went unanswered but earlier the 20-year-old forced Sam Johnstone, the West Brom goalkeeper, to smother a low cross.

Bilic bemoaned his side’s lack of aggression last time out – he reminded his players they are not at school but in the thick of an unforgiving competition – but the West Brom manager will have been satisfied with their application here. Grant was a livewire and, had the former Huddersfield striker not hesitated when threaded through by Matheus Pereira – he appeared to fear the offside flag – he surely would have got a cleaner shot away at goal. Grant agonised on the brink of half-time, when the assistant referee did raise the flag after the striker nodded in Grady Diangana’s cross. Filip Krovinovic dragged wide early on and Ivanovic, involved in both boxes, was left hopping in frustration after failing to meet a corner with any conviction.

Burnley had Pope to thank for a flurry of fine saves approaching the hour mark. Diangana corkscrewed away from Gudmundsson at the byline before bending a right-footed shot towards the far corner, which Pope pushed to safety. But a goalmouth scrambled ensued, culminating in Ivanovic blasting the ball at the towering James Tarkowski before Pereira took aim when the ball pinballed in his favour. Pope clawed Pereira’s shot to safety and then clambered on to the ball after Ivanovic attempted to reach the rebound.

That hairy episode seemed to bring the best out of Burnley, who twice went close at the other end. First Chris Wood, the former West Brom striker, sent a header thumping against the crossbar after meeting a wonderful first-time whipped cross by Ashley Westwood and then Johnstone tried to outdo Pope, flying to his right to prevent Ashley Barnes’s header from nestling in the top corner. An offside Wood then headed the rebound against the woodwork, prompting the striker to roar in frustration. “It will come, it will come,” Pope urged from down at the opposite end. But that elusive goal never did arrive. – Guardian