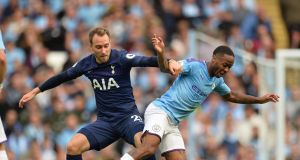 Mauricio Pochettino fears the transfer market uncertainty over Christian Eriksen is hurting the player and Tottenham, as he expressed surprise that the situation had not been resolved.

Eriksen said at the end of last season that he was open to a new challenge at another club – having been at Spurs since 2013 – in a move that was interpreted as being designed to encourage Real Madrid to bid for him. The 27-year-old, who is out of contract at Spurs next summer, has long been linked with a switch to the Bernabéu.

But as yet, neither Real nor Juventus – his other oft-mentioned suitors – have made a firm offer. Atlético Madrid made contract with Spurs about Eriksen earlier in the summer at the time they signed the full-back Kieran Trippier from them, but they also appear to be playing a waiting game. Spanish clubs and those in Germany and France have until September 2nd to complete their incoming business, unlike Premier League clubs, for whom the window closed on August 8th. Pochettino remains frustrated at the disparity, mainly because it puts Spurs in a vulnerable position with regard to Eriksen.

Pochettino, who has signed two central midfielders this summer, Tanguy Ndombele and Giovani Lo Celso, has been unable to say whether he thinks Eriksen will remain at Spurs or, indeed, sign a new contract, which has come to feel increasingly unlikely.

The impression Pochettino gave before tomorrow’s home game against Newcastle was that he was bracing himself for a bid for Eriksen before September 2nd. If one came from a club that Eriksen wanted to join, Spurs would have a major problem. As an aside, Spurs go to Arsenal on September 1st.

“It’s not the best situation for him and for everyone,” Pochettino said. “It is not what I think the club or the player expected [it] to be. You cannot put a finger on the problem. You try to minimalise the problem, try to treat the situation. This is an important player who needs to help the team with his performances.

“I am always open to help the club and to help the decision of Daniel [Levy, the chairman]. I know really well that decisions like this are not easy but I always try to be in the position to take the best benefit for the club. And for the player, too. The most important thing is to try to take the best decision for both sides.”

Eriksen is set to feature against Newcastle, with Ndombele out with a minor thigh injury and Lo Celso lacking match fitness. Lo Celso had an extended holiday after his involvement with Argentina at the Copa América, which finished for him on July 6th, and he signed for Spurs on August 8th after a week without training at Real Betis.

“Lo Celso is in a situation that is not going to be easy,” Pochettino said. “He’s training well but is still so far away from what we expect.” – Guardian