Sheringham, Solskjaer, The Treble and the surges of joy which only sport can bring 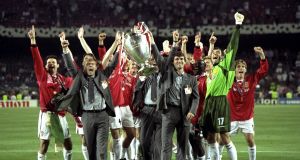 Paul Scholes and Roy Keane, who were suspended for the final, lift the European Cup. Photograph: Alex Livesey/Allsport

“When are you travelling,” asked the man in the passport office casually enough, appearing to assume it wouldn’t be for a couple of weeks yet because nobody could be stupid enough to leave checking the expiry date on their passport until the day before they were due to set off.

He seemed more disappointed than angry, which, of course, always makes it worse. He shook his head, rolled his eyes and with one of history’s most monumental displays of humanity, said to come back just before closing and a non-expired passport would be ready. But to never, ever do this again. ‘Brigini’s honour.’

As the 1999 Champions League final moved in to injury-time, all you could do was rue his kindness. If only he’d said ‘in your dreams, Missy’ you’d have been watching this cockroach of a game, and the inevitability of Bayern Munich winning it, from the couch rather than having taken out a home improvements loan to pay for the trip, despite not actually owning a home.

But having already emptied the rainy day piggy bank for the trip to Turin for the second leg of the semi-final against Juventus - the Roy-Keane-header game - the obvious thinking was that you might as well be hung for a lamb as a sheep - if you’re going to end up broke, you might as well go big. It’s not advice that Eoin McGee fella has given anyone yet on ‘How To Be Good With Money’, incidentally, so you’d wonder about his credentials.

Anyway, the package looked good value, promising, as it did, a luxury hotel overlooking the sea, and only a hop and a skip from Barcelona.

Having left the airport in broad daylight, it was pitch black when we got to the hotel, the trip feeling so lengthy it was as if we’d driven all the way back to Dublin via the Channel Tunnel. And when the curtains were thrown open in the morning the only view was a backyard that contained two chickens, a rusting bicycle and a clothes line with bloomers the size of a parachute. Maybe the sea was hidden behind them.

At least the package had also come with the promise of a ticket offering a bird’s eye view of the game. They were as good as their word. It was quite literally a bird’s eye view, as in, say, one a seagull flying high above the Nou Camp might have had. Messi must look like an ant to the Barcelona fan who sits in that seat.

It took so long to get up to the Gods some of us missed Montserrat Caballé singing ‘Barcelona’ while being driven around the pitch in the back of a golf buggy. The pain will never numb. The man in the neighbouring seat, who had a dagger tattooed on his neck, missed her too, arriving huffing and puffing just in time to fill the air with exceedingly rude words when the teams were announced and Jesper Blomqvist‘s name was called out. You wouldn’t mind, but Dagger Man was a Manchester United fan, so Blomqvist was on his side.

The Swede’s crime, of course, was to have played that dodgy pass in Turin that had necessitated Keane flattening Zinedine Zidane, the ensuing yellow card suspending him from the final. No more than Roy, Dagger Man would never forgive him.

And Paul Scholes was missing too, although Jesper was innocent on that one. If Scholes had scored as many goals in his career as he mustered mistimed tackles, he’d have broken Pele’s record.

By then, Manchester United had won the double, so even without their engine room, they were hardly the Dog and Duck. But with every Bayern Munich name that was called out, Dagger Man slumped further in his seat. Helmer, Scholl, Strunz, Fink . . . “**** me,” he said. And they were just the subs.

And when United’s subs were called out and David May, Phil Neville and Jonathan Greening were among them, Dagger Man had the look of someone who wanted to go home. But Ole Gunnar Solskjaer and Teddy Sheringham were sitting beside them on the bench, so there was always a chance they might contribute in some way. Chuckle.

But between Mario Basler’s sixth minute goal from a free-kick and the game moving in to injury time, it’s a blur. Maybe it’s because it was all so forgettable, but more likely that what happened between 90+0:36 and 90+2:17 just erased everything else from the night. You know yourself: “Football, eh? Bloody hell.”

It’s not Sheringham’s equaliser that is the most memorable moment from the night, and the squealing cacophonous roars that rose up from the United sections, all of them looking like they were dancing on trampolines. It’s not even Solskjaer’s winner and the bloody impossible madness of it all. It was Dagger Man dissolving in to tears.

This big, burly brute of a Mancunian with his shaved head and lethal weapon tattooed on his neck, lest anyone think about messing with him. No dancing, no punching the air, no squealing. He couldn’t even get out of his seat. He just bowed his head and sobbed. It was only when he caught a seagull eye’s glimpse of the team when they came ‘round with the cup that he stood up and applauded. He didn’t even shower abuse on Jesper, although he might have been tempted once he spotted Roy in his suit.

The whole experience took him to an emotional place he might never have visited before. And that’s probably one of the reasons why we love sport like we do. Probably more than we should. The things it does to you. Those surges of joy just when you’ve lost all hope. The places it takes you.

Some of used to think we’d shake it off when we grew up and had bigger things to be thinking about, but most of us are grateful that it never left us. That it keeps on bringing those surges of joy.

You can’t but think of Dagger Man these days and wonder how he’s coping without sport. Probably not very well, like most of us. Attempting to make sourdough just isn’t a substitute for watching Bruno Fernandes do his thing.

God, you’d miss it. But when it comes back, that’ll be the biggest surge of joy ever.

Share your favourite sporting moment to be in with the chance to win a selection of sports vouchers. Entries should be no more than 400 words and can be sent to sportingmoment@irishtimes.com. The three overall winners will be published on Saturday, April 18th.