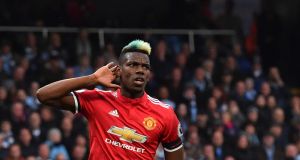 Is Paul Pogba on the verge of greatness or will Saturday’s barnstorming shredding of Manchester City prove the falsest of dawns? After the Frenchman’s finest display for Manchester United drove José Mourinho’s side to a memorable 3-2 derby win, Pogba declared himself partly “disappointed”. The 25-year-old had just thwarted City’s bid to secure the title before a feverish Etihad Stadium with a memorable second-half performance. It dragged United from 2-0 down at the break, teetering on the brink of a humiliation, to victory.

Yet United had been hapless before the interval and Pogba a passenger. Here was an occasion for United’s star midfielder to show why £89m was invested in him. For him to boss a game that really mattered. Instead, balls bounced off his shins, passes found no one and Pogba was a boy against City’s men throughout the opening 45 minutes.

Afterwards he acknowledged United’s abysmal first half, saying: “I feel very happy [about victory]but there is one side of me that is disappointed, too, because with a performance like we had in the second half, if we had done this all season, I think we would be fighting for the title with City or we’d be just in front of them.”

His analysis had a glaring omission: Pogba failed to apply it to himself. “Disappointing”, “below par”, “average” are three unwanted adjectives that have characterised Pogba’s season for United. If only he had played all season as he did for those 45 minutes on Saturday, who knows how much closer United might be to City.

Instead, Pogba’s duff form caused unrest between him and Mourinho, and led to the manager dropping him in February for a Premier League win over Huddersfield Town and the Champions League defeat by Sevilla in March.

Mourinho is a sharp observer of any footballer’s form and attitude and despite the club-record price tag was cold-eyed enough to exclude Pogba. The frustration was double because of the potential the Frenchman possesses.

Factor in zero goals in any competition for United since a 4-1 win over Newcastle United on November 18th and Pep Guardiola’s pre-derby revelation that Pogba’s agent, Mino Raiola, had offered him in the winter window, and the player’s future at United beyond the summer appeared in the balance.

The sense was compounded by that awful first half. Pogba’s problem is that when misfiring he appears to amble around, apparently not caring. In the second half all of this felt bunkum.

Suddenly Pogba was Roy Keane-esque, driving United forward, berating team-mates, a true force of nature who bent the match to his will. His first goal was pure desire, as he latched on to an Ander Herrera chest-down to beat Ederson. This was on 53 minutes. Ninety seconds later Pogba had a second, a header of some beauty, as he hung in the air before flicking the ball past the helpless Ederson again.

What Pogba had done was playground stuff. He had become the dominant lad in the schoolyard who, at will, turns it on and wins a match single-handedly. Chris Smalling grabbed a memorable 69th-minute winner because of the unstoppable momentum Pogba had created for United.

The question is: can Pogba draw on this supreme performance and ensure he turns it on week in, week out? His team-mates queued up to implore him to prove he can.

Nemanja Matic added: “With his personality Paul can [drive us on]. He needs to be our main player because when he plays in that position he needs to resolve the games and he needs to take responsibilities. Don’t forget he had some injuries this season and that he had three months out, and it is not easy to come back after that.

“People expect a lot from you when you play for United. We know this is normal but he is still young and can improve and [against City]he showed character and personality, and if you saw him in the last 10 minutes he fought a lot for the team and I hope he will continue like this.”

So, too, will Mourinho, who was correct to drop Pogba, if Saturday is the true benchmark of what the Frenchman can do.