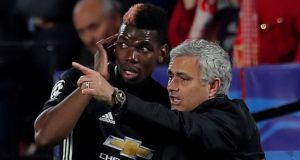 Paul Pogba’s agent, Mino Raiola, is set to meet Manchester United officials in November to discuss the midfielder’s future. The player’s relationship with José Mourinho reached an all-time low this week when he was stripped of the vice-captaincy and the pair were involved in a frosty exchange at the training ground on Wednesday.

Pogba has been at United since rejoining from Juventus for a then world-record fee of £89m in 2016 and Raiola wants to meet the club to establish whether they would be willing to let his client go in January or next summer. The agent also wants to wait until November to see whether Mourinho is still the manager.

United did not contemplate selling Pogba last summer when Barcelona made an offer of £45m plus the players Yerry Mina and André Gomes, while Juventus did not bid because United told them there was no point.

However, matters have escalated in recent weeks, with Pogba criticising the team’s style of play, saying they should “attack, attack, attack”, especially at home, and Mourinho taking umbrage at the player posting an Instagram video of himself in a jovial mood on the night of the Carabao Cup defeat against Derby County.

Pogba, who has a contract until 2021, claims to be happy in England, happy that he is at United at this point of his career and happy with his teammates. The fact that his relationship with the manager is so poor, however, means he is open to a move.

Raiola, in his meeting with United, wants to establish whether the club will keep backing Mourinho even if results and the general atmosphere around the club do not improve – and if that is the case he will start to look for ways out for the France midfielder.