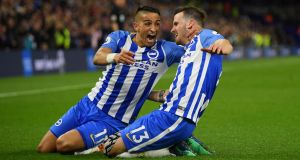 Brighton have enjoyed plenty of giddy highs since their restoration to the top division last summer, but this was a victory to cap an entire campaign. In securing a first win over Manchester United in 36 years, Chris Hughton’s team have secured Premier League football for another season.

It was a glorious way to achieve their term’s principal aim, and one to be savoured through the players’ post-match lap of appreciation.

They had not squeezed out the win amid pressure exerted by their opponents. Indeed, Albion’s had been the brighter approach for long periods, their attacking play far more assured and incisive than the disjointed visitors.

This is the first time United have been beaten at the three promoted teams in the top flight and, while they are still likely to finish second, few of those players who were offered the chance to impress by José Mourinho will have merited inclusion in the FA Cup final on this evidence. The Portuguese’s body language for much of the occasion spoke volumes.

The locals probably had enough points already to guarantee a second successive season in the top flight, though a few doubts had still nagged with away games at the Premier League winners and the Champions League finalists to come in the final week. This, even against a team as imposing as United, had felt their best opportunity to register reward from the run-in and that sense was only reinforced through the opening period.

Where Albion were urgent and energetic, the visitors were horribly slack. Mourinho initially prowled his technical area, disgust etched across his brow. Soon he had retired to his bench, and long before the half-time whistle was in the mouth of the tunnel, as if too infuriated to be any closer to such a display.

He had made six changes, with the injured Alexis Sánchez among those omitted, though that did not excuse the carelessness of it all. Simple passes were guided out of play, team-mates delivering blindly and misreading colleagues’ runs, their wavelengths forever scrambled, or simply losing their footing with alarming frequency.

Sloppiness infected the visitors’ approach with only David de Gea excelling. The goalkeeper summoned a wonderful save midway through the first half, springing to his right to turn Glenn Murray’s vicious shot from distance beyond his post. The striker had maybe sensed his opponent marginally out of position, but De Gea’s reflexes were not in doubt.

There was a similarly timely fingertip save to deny the pesky Jose Izquierdo as he cut inside seeking to replicate the goal – plundered against West Ham – voted Albion’s best of their top flight campaign, and a block from Pascal Gross at his near-post.

Izquierdo and Anthony Knockaert harassed United’s back line, Murray causing them problems in the air, and every attempt to build incisive possession as a riposte broke down in or around the Brighton penalty area. It was as if United had been deflated to have Marouane Fellaini’s third-minute goal ruled out, correctly, for offside. Only Marcus Rashford’s running hinted at reward, though even his decision-making was skewiff at times.

There was always likely to be a response thereafter, renewed intent signalled by Paul Pogba’s near-post shot which was well saved by Mathew Ryan, though Brighton retained a threat on the counter and fully merited the lead finally gleaned just before the hour. Izquierdo, tormenting Matteo Darmian, saw his cross flick up off De Gea’s glove towards a mess of bodies at the far post, with Gross emerging from the clutter to head goalwards. That attempt was hooked away from behind the goal-line by Marcos Rojo, with the hosts’ celebrations delayed until the referee’s watch had buzzed in recognition of the reward.

Izquierdo might have pilfered a second while United were still digesting their deficit, sliding his shot wide of the near-post from Gross’s centre, though the visitors were finally spurred into some sort of action as they chased parity. Not that they hemmed their hosts back. Ryan denied Rashford and the substitute Jese Lingard, a former loanee in these parts whose arrival had been greeted with polite applause, from distance though far too many of United’s opportunities had to be conjured optimistically from deep with Brighton’s back line disciplined and resolute.

When they did gain a clear sight of goal late on, Rashford’s return flick finding Lingard bursting into the penalty area, the England midfielder could only squirt his shot wide as Shane Duffy slid in to challenge. That rather summed up both teams’ night. Albion simply would not be thwarted. – Guardian service