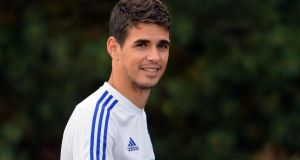 Chelsea have announced they have agreed terms with Shanghai SIPG for the permanent transfer of midfielder Oscar.

The 25-year-old will join the Chinese Super League side at the beginning of the January transfer window after four-and-a-half years with the Blues.

During that time the Brazil international has won the Premier League, Europa League and League Cup but, more recently, he has found his chances limited under new boss Antonio Conte.

A statement on Chelsea’s official website read: “We thank Oscar for his wonderful service and wish him the very best of luck for the future.”

Oscar will join former Chelsea boss Andre Villas-Boas at Shanghai SIPG and is the latest big name to move to China.

Ex-Blues striker Demba Ba is at Shanghai Shenhua while Graziano Pelle swapped Southampton for Shandong Luneng in July for a reported £13 million.

Ramires, Gervinho, Hulk and Ezequiel Lavezzi have also been tempted to head to the Far East and more could follow in January.

“You must be very proud to play in this league. Because I think now it’s the best league in the world.

“For this reason, I don’t worry about this.”

Oscar arrived at Stamford Bridge in 2012 from Internacional in his native Brazil and made 203 appearances for the Blues, scoring 38 goals.

The Sao Paulo academy graduate has started just five Premier League games this season, though, with Conte settling on a side which has won 11 matches in a row.

His last Chelsea appearance came off the bench in the 2-1 victory over Tottenham on November 26th.

A statement on Shanghai SIPG’s official website read: “Oscar will soon arrive in Shanghai to complete his medical examination.”

1 Worst sporting moment: White knuckle ride on a hate-filled night at Windsor
2 Rugby to return in England with rucking but no hugging
3 Brennan concerned over scale of the challenge facing the GAA next year
4 Irish roots with the bit of Jo’burg dog: Curtis Campher has arrived
5 Arsenal complete signing of free agent Willian
Real news has value SUBSCRIBE