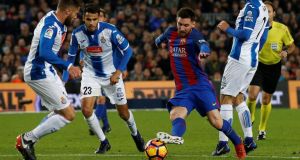 One of the most remarkable things about Christmas is its basic reach, the layers of ritual and habit, the way this very special time of year manages to smear itself like a basting of goose fat across every one of the vital senses. Overwhelmed by these ruddy-cheeked riches, it can be a tricky choice. We all have our preferences. But in the end it’s really just a personal choice which part of Christmas you hate the most.

The list is endless. Motorway gridlock. Men who use the word Chrimbo. Adorable bright-eyed, husky-voiced, bowl-headed American children in family movies whose hearts are full of Santa and joy, and who will within the next five to six years appear in Nevada county sheriff mugshots looking glazed and insolent (– you won’t believe what Timmy McMuffinface looks like now!) and being sued by their own mad parents in supermarket gossip magazines.

Welcome to the most wonderful time of the year, a world of 32-pack, breaded bacon-cheese cranberry bites, angry jabbing fingers in the Argos queue, faux-straw supermarket Stilton sets and department store TV adverts designed to taunt you into crying hot empty tears of existential anguish.

Plus, of course, not forgetting the special horror of the traditional family Christmas, with all its airless resentments, the arguments about meat, the tearful moments by the kitchen sink, the ghosts of Christmases that never were, lives that didn’t happen, setting like a congealed custard skin over every attempt to jazz some life into these stale and unforgiving Victorian rituals. Happy Christmas one and all!

In the middle of which sport always seems to loom even larger. Perhaps it is the element of escapism, a moment of clarity in the middle of all this. Whatever the reason it’s customary at this time of year to sigh a little, adopt an expression of sickly piety, fill the fountain pen with liquid cheese and write about those moments of the year, the vignettes that offer a message of sporting hope for humanity.

Happily, there are some things that always deliver. I’m talking, of course, about Lionel Messi’s amazing dribble against Espanyol, my own moment of the week, festive season and possibly year. So forget Christmas. Let’s talk Messi. It is funny how it still seems important to go on about him 12 years into his extraordinary sporting life. You’d think by now we might have become glazed by repetition. But not when he keeps doing things like this.

Barcelona played Espanyol on Monday night, a tight, furious derby game they were winning 1-0 with 67 minutes gone. Now and then you hear the suggestion La Liga is a soft touch. In which case best not tell Andrés Iniesta, who starts things off by wriggling past three players and having his legs whipped out violently from under him as he slips the ball back to Messi 45 yards from goal. At which point, we’re on.

Messi looks up. Much of the last hour has been spent hurdling tackles and forcing Espanyol back. Ahead of him now are seven players arranged in a tight, angry triangle on the edge of their own area. Freeze-frame and Messi resembles briefly the blue and red fairy at the top of this densely packed defensive Christmas tree. This is the only remaining festive reference from here. Hopefully it conveyed a feeling of warmth, goodwill and childish wonder.

The first thing Messi does is nutmeg Javi Fuego. This isn’t as easy as it sounds. Fuego played for Spain through the age groups. He’s 32 now. From a distance he looks like the kind of shin-raking defensive midfielder who stalked the Spanish league in the 1980s. By contrast Messi’s nutmeg is disarmingly gentle, a discreet little dab through the gap left by Fuego’s stride.

It’s a funny thing about Messi, this gentleness. Gerard Piqué remembers him turning up at the academy and not saying a word for his first month. Even now as he inflicts a relentless, often humiliating pain on his opponents Messi does so with a nuzzle, a cosseting touch. The famous dribble in the Champions League semi-final that left Jérôme Boateng on his back last year was like a loving little cosh to the back of the head.

Next Messi skips away from Diego Reyes. Reyes has 39 caps for Mexico. He is 6ft 3in tall and quick to the ball. Messi has had to get used to being outmuscled at times. Watching him glide away from Reyes you remember also how strong he is, how exhausting his jump-start movements must be, the need always to floor the throttle to find space, to be fresh right to the end. He may look like a friendly cartoon mouse. But Messi is also a warrior in his way.

Next up is Gerard, who has sprinted back to cover. As Messi veers close Gerard jams his feet together, fearing the nutmeg. Messi tacks right and brushes past, the simplest of shuffles. But then for a prodigious dribbler he doesn’t have a huge range. Messi isn’t an outrageously creative mover, like Ronaldinho with his inventive dance-style routines. Everything is a variation on the same matrix of movements, the feint and the sideways spring, that extraordinary ability to see the space and leap right into it. Twelve years on it’s still a surprise to see him do it.

By now we are four seconds into Messi’s dribble. There is still one to go. David López is at centre-back. López grew up in Barcelona. He made his La Liga debut the same season Messi won his second Ballon d’Or. Aside from his spell at Napoli his career has effectively been spent in Messi’s near-shadow. Here he watches as Messi jinks left three times, then steps out to nick the ball.

At which point Messi produces what seems in the moment like a startling change of plan. He turns right instead, at a giddy speed. López hares off the wrong way, a pained look already spreading across his face as he paddles thin air. By now the two full-backs are also closing in, like two ends of a piece of thread yanked from its stitches. The whole game is jammed into that shrinking triangle of green. Finally Messi does what these high-end ball players tend to do, freezing time, finding a second to lean on his elbow, think about it and switch the ball to his left foot. The shot is weak, a toe poke straight at Roberto who parries it. Luis Suárez smashes in the rebound. The Camp Nou erupts.

And that was pretty much that for Messi’s amazing dribble, although a minute later he did run through four defenders and tee up Jordi Alba for a third. This team of outsize superstars will continue to win games like these as the season tapers into the tiny margins of elite-level triumph or elite-level failure. Not much will be changed by another Messi dribble, another round of applause, a reignition of the endlessly tedious argument about greatness and stature.

The best bit will remain that small, still square of green around Messi as he tickles out his intricate patterns, a reminder that even in the middle of the familiar, parping brouhaha of commerce, dubious practice and branding schmaltz, sport can still produce these moments of purity, its own enduring magic and sparkle.