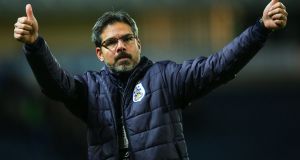 Huddersfield Town looked just fine. From low in the main Riverside Stand at what is now called the John Smith’s Stadium, the ground spread itself beneath the winter sun. The already-on floodlights cast the Kilner Bank opposite in a Saturday-afternoon glow. The treetops behind framed it all.

Then the game started, and while it was not one that made you think the £15 ticket was a bargain, Huddersfield won.

Those leaving, bar the travelling Bristol City fans, headed up the slope into town happy to be in the top six again, in the Championship play-off places.

“Town”, as ’Uddersfield are known to locals, won the next match, at Burton Albion, then the next one, at Norwich City. Having not won for five games, suddenly Town had a pre-Christmas hat-trick, and with the imploding and quite possibly relegation-bound Nottingham Forest next, Huddersfield should cement fourth place, if not improve upon it.

No wonder people are looking at Town’s manager, David Wagner. The club have not been a top-flight presence in the Premier League era; in fact, they’ve not been in the top division since 1972, when they played at Leeds Road. So, it’s new-era stuff, at least potentially.

Wagner only arrived – from Germany – last November, when Huddersfield were in a losing slump that continued after his appointment. The club were shedding fans, too – just over 10,000 turned up to see Reading in March.

Finishing 19th last season hardly encouraged thoughts of promotion, but Wagner went on a recruitment drive, chairman Dean Hoyle slashed season-ticket prices and the consequence has been a revitalising run played out in front of an average attendance approaching 20,000.

On Tuesday, Hoyle described the season to date as “special”. He felt compelled to do so because Wagner had just been offered – and rejected – the Wolfsburg job.

The Bundesliga can wait. Germany is where Wagner, with a German mother and American father, was raised and played. He and Jürgen Klopp became best friends; Wagner was with Klopp as a coach at Borussia Dortmund.

They share a bonhomie and attitude to play that Wagner revealed after his first game in charge, a defeat to Sheffield Wednesday.

“In the last 20 minutes Sheffield Wednesday were very strong. In that time they beat us,” Wagner said. “We’d like to create a new style, and for this you need unbelievably good fitness.”

There has been a focus on high intensity ever since, though it must said it was in evidence only sporadically against Bristol City.

But you take these victories. Klopp will have been happy with the bare result. He has declared himself a Town fan, writing in his programme notes before Liverpool played Leeds United in the League Cup last month: “Leeds are one of the ‘great teams’ of England, I believe: big history, big support. I know this because James Milner always tells me, again and again and again.

“Millie [Milner] has told me great things about this club and this city, even when I do not ask him. He doesn’t like the fact I support Huddersfield Town because of my best friend, David Wagner. So I am sorry for this, Millie, but I hope Huddersfield finish as the top Yorkshire team this season.”

Yorkshire: the biggest county in England, the self-proclaimed “God’s own county”, has found that even such status has not prevented its football marginalisation over the past few years.

Cricket was long the county sport and Leeds and Huddersfield were also rugby league strongholds. Cycling is now a major force in Yorkshire.

As Leeds United dropped from the Champions League semi-final down to the third tier, suffering Ridsdale, Bates and now Cellino; as Sheffield Wednesday and United joined them; as Bradford City fell away, and so too Barnsley, Yorkshire’s relevance to the boomtime Premier League has come to rest with Hull City.

Middlesbrough’s “Yorkshire-ness” is open to debate. Historically, the county played cricket there, though not for the past 20 years. When Boro faced Hull at the Riverside a few weeks ago it did not have the feel of a Yorkshire derby, certainly not in the way of Sheffield United v Leeds, for example.

Yet the last time that match was played in the top division was in 1994. Wednesday v Leeds in the Premier League was last played in 2000. Leeds United-supporting Anthony Clavane’s latest book is called A Yorkshire Tragedy.

A generation of Yorkshire children has grown up with an absence, hearing as much about Hillsborough and the Bradford fire – and Orgreave and Jimmy Saville – as about Yorkshire football’s glory days.

But look at the Championship table: Huddersfield are fourth, Leeds fifth, Wednesday sixth. A division below, and Sheffield United and Bradford are second and fourth.

It is premature to speak of revival, but there is optimism. Yorkshire football is beginning to look interesting and relevant again.

Mesut Özil is s**t. Oh, no, he isn’t, he’s brilliant. Yes, that’s right, except sometimes when he just saunters around. Then he’s a problem, except when he’s the solution, which was a few weeks ago, wasn’t it?

On and on and on.

It might not be quite in the manner he would choose, but there’s a reason for saying that Mesut Özil is the footballer du jour. The reason is fickleness.

It was on November 1st when Özil collected the ball midway in Ludogorets’s half in a Champions League match, lobbed the oncoming goalkeeper, dummied one defender and then another, and slid the ball into the net. It’s a contender for goal of the season.

Is Özil “world class”? That was one question in the goal’s aftermath. Well, he’s played in a World Cup final and won it.

As of last Sunday at Manchester City, however, Özil is crap. Lazy.

If he listens, he must be bewildered. He might just think that the inconsistency he is alleged to embody extends to the land of instant opinion.

There have been replays this week of the Eric Cantona goal against Sunderland in December 1996. It must be the most overrated goal in modern times.

Cantona then stands, collar up, and milks the applause. It is this that is celebrated, though those of us working at the game were focused on United’s dire opening – they had drawn three of their previous four and were sixth in the table.

In comparison with the goal that Cantona drilled in at St James’s Park nine months earlier to deflate Newcastle’s title challenge, it was nothing.

But there you go: Style 1 Substance 0.

1 Worst sporting moment: White knuckle ride on a hate-filled night at Windsor
2 Irish roots with the bit of Jo’burg dog: Curtis Campher has arrived
3 Irish Open confirmed for Galgorm Castle in September
4 Bundini Brown: The man who invented ‘float like a butterfly, sting like a bee’
5 Acute disillusionment the only response to growing FAI debacle
Real news has value SUBSCRIBE