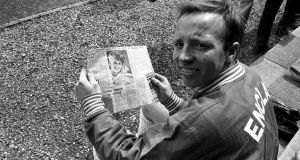 Nobby Stiles was one of the most popular of England’s 1966 World Cup winners, not least because his toothless grin, dishevelled appearance and carefree cavorting around Wembley with the Jules Rimet trophy provided delight at the time and images to last for many decades longer.

Younger generations familiar with the well-groomed athletic young men who populate the Premier League might have difficulty recognising Stiles as a footballer at all, let alone a World Cup winner, and there were plenty of opponents back in the day who might have voiced the same opinion. Even though he played almost 400 games for Manchester United, winning the European Cup in 1968 after the title win in 1967, the feisty midfielder was frequently criticised for an over-physical approach to the game. Despite his diminutive stature – at 5ft 6in Stiles was no taller than his England teammate Alan Ball – he was what would be referred to today as an enforcer, though a few years ago in these pages Jonathan Wilson went further and described him as “a destroyer”.

That may be a little harsh, though there is no doubt Stiles relished the destructive element of the game. He was never happier than when asked to man-mark a flair player from the opposing side, as was the case when he managed to nullify the great Eusébio in England’s World Cup semi-final in 1966. He was tasked with the same challenge in United’s 1968 European Cup final against Benfica, this time with slightly less success, though the important thing was that he finished on the winning side on both occasions.

Manchester-born and originally a fullback, Stiles made his debut for United in 1960 and immediately impressed Matt Busby with his tenacity in winning the ball and his ability to offload with a simple pass to a teammate. The notion of a holding midfielder, the type of role Claude Makelele would come to define in later years, was still in its infancy in the 1960s, but Busby moved Stiles inside with notable success to break up opposing attacks and particularly to keep an eye on any creative forwards the opposition might boast.

He did this with gusto, and sometimes with not a great deal of sophistication, though defenders could get away with a lot more half a century ago. It is fair to say Stiles would struggle in the modern game, or at least have to make drastic changes to his game. Every team had its hard man at the time, though unlike, say, Norman Hunter, whose uncompromising style was backed up by considerable natural ability, Stiles was usually selected principally for his willingness to bite opponents’ legs.

Stiles made his England debut in 1965 and played every minute of the World Cup finals, though he might not have done had action been taken over a bad foul that ended the tournament of the French midfielder Jacques Simon in a group game. He would almost certainly have been sent off in a modern World Cup, yet despite calls for him to be dropped he retained his place, presumably because Alf Ramsey knew what type of player he was going to need against Argentina.

Ramsey viewed Stiles a little euphemistically as the “spoiler” of the team. If he recognised that sometimes he went too far, he weighed that against his effectiveness at winning the ball and looking to pass it to Bobby Charlton, just as he did at Manchester United. Famously a man of few words, Ramsey singled out Stiles for particular praise after his domination of Eusébio in the semi-final.

In international terms, Stiles’s timing off the pitch was arguably better than when playing, since as early as 1967 he began to lose his place in the England side, mostly losing out to Alan Mullery. Ramsey loyally selected him for the 1970 World Cup in Mexico, but he never got on the field and never played for his country again. His total of 28 England appearances meant he was the least-capped of the 11 players who triumphed in 1966, yet the two or three years when he was a regular choice neatly encapsulated his country’s finest hour.

Similarly, he managed to avoid growing too old with the rest of the United squad and therefore dodged the indignity of relegation in 1974. United sold him to Middlesbrough in 1971, then after a couple of seasons on Teesside he turned up at Preston North End to be reunited with his close friend and teammate Charlton.

The idea was that Stiles would play and coach and Charlton would manage, but it never got much chance to work. Charlton resigned when the club sold a player against his will, and though Stiles stepped into the breach as caretaker he lasted a matter of days before stepping down in solidarity with his friend.

There were happier times at Preston when Stiles returned as manager between 1977 and 1981, though after three years in the NASL with Vancouver Whitecaps, his final managerial assignment at West Bromwich Albion was less satisfying. He managed three wins, was sacked midway through his first season, and later admitted this was the start of his struggle with depression.

He also had prostate cancer and lived for several years with dementia, unable to attend 1966 anniversary functions because of poor health. Although his death at the age of 78 was not entirely unexpected, the next few days will doubtless confirm his enduring popularity. Footage of jubilant England players is rare enough, though only one player is famous for dancing on the Wembley pitch with the World Cup in one hand and his dentures in the other. – Guardian