Nigel Pearson confirmed as Watford manager until the end of season 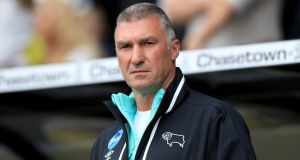 Watford have appointed Nigel Pearson as head coach, initially until the end of the season, the Premier League club have announced. Photograph: Tim Goode/PA Wire

Nigel Pearson will attend Watford’s home game against Crystal Palace on Saturday after agreeing to take over from Quique Sanches Flores at the Premier League’s bottom club, initially on a short-term contract to the end of the season.

Pearson will be assisted by Craig Shakespeare, who worked with him during his two spells at Leicester as well as at West Bromwich Albion and Hull City, and briefly succeeded him at the King Power Stadium following Pearson’s departure in 2015.

Club sources denied reports that they approached Javi Gracia, who was sacked three months ago, four games into the season, over what would have been an extraordinarily swift return. Their priority has been to identify a manager with experience of a relegation battle and Pearson notably coaxed Leicester away from danger in 2014-15.

The club were bottom and seven points from safety in early April and won seven of their last nine games to finish 14th. He left the club that summer and was replaced by Claudio Ranieri, who guided them to the Premier League title the following season.

Pearson has since had a short spell at Derby and 18 months at OH Leuven in Belgium, who terminated his contract in February. There will be scope to extend his stay at Watford if he is successful. The club have won once in the league this season and lag seven points from safety. The under-23 coach, Hayden Mullins, will be in charge for the Palace match.

Watford’s chairman Scott Duxbury said: “Nigel is an impressive coach and comes with all of the experience and success we believe can have a very positive impact on our season.

“It’s been a pleasure spending time listening to the passion with which he talks about the game. His enthusiasm, organisation and motivation will I’m certain prove essential in driving the team forwards and upwards over the coming weeks and months.” – Guardian