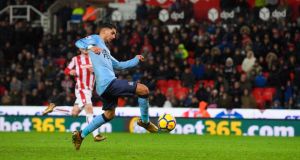 Mark Hughes is on the brink once again after his controversial decision to name a weakened team at Chelsea spectacularly backfired with defeat 48 hours later at the hands of a Newcastle United side who had won only one of their previous 12 matches. Ayoze Pérez scored the goal that eased Newcastle’s relegation fears, saw them leapfrog Stoke in the table and piled the pressure on Hughes.

The Stoke manager made six changes to the side who were hammered 5-0 by Chelsea and knew that only a victory would provide vindication for his team selection at Stamford Bridge. Instead the game finished to a chorus of boos and, for the first time, loud chants from the Stoke supporters for Hughes to be sacked.

Although Karl Darlow produced several excellent saves for Newcastle, including a wonderful instinctive stop to keep out Mame Diouf’s close-range header in the 86th minute, Stoke were poor for long periods of the game and arguably got what they deserved. Peter Coates, the Stoke chairman, was there to witness it all and Hughes could have been forgiven for fearing the worst as he made the lonely walk along the touchline at the final whistle.

Stoke, not surprisingly, were unrecognisable on paper from the team that lined up against Chelsea on Saturday. Kurt Zouma, who was ineligible for that match, came back into the team along with Erik Pieters, Joe Allen, Xherdan Shaqiri, Maxim Choupo-Moting and Peter Crouch as Hughes hoped that his gamble would pay off.

By half-time, however, Stoke could count themselves fortunate not to be behind. Although they enjoyed much more possession, they registered only one shot on target, when Charlie Adam’s 35-yard free-kick was turned behind by Karl Darlow, and lived a charmed life at the other end of the pitch.

Christian Atsu, who was thrust into a central attacking role as Rafael Benítez left out Dwight Gayle and Joselu, had a golden opportunity to put Newcastle in front in the 14th minute following a raid down the Stoke left. Perez, one of five changes to the Newcastle side, released DeAndre Yedlin in space and when the defender’s cutback picked out Atsu on the edge of the six-yard box, a goal beckoned. Atsu, however, shot too closely to Jack Butland and the Stoke goalkeeper was able to block.

If that was a reprieve for Stoke it was nothing compared to the opportunity that Ciaran Clark squandered on the half-hour mark. Matt Ritchie swung in a corner from the right, Pérez flicked on at the near post and Clark, with the goal yawning, simply had to score. Somehow the Irishman contrived to lift the ball over the bar from two yards out.

The sight of Charlie Adam trying to score from just inside the Newcastle half provided a measure of Stoke’s desperation at times. Adam, in fairness, was at least trying to make things happen by being positive in possession. Chances remained few and far between, although Choupo-Moting did draw an excellent save from Darlow with a curling 22-yard shot that turned around a post.

Shaqiri, Stoke’s most talented player, was having one of those days when he looked like he would rather be anywhere than the Bet365 Stadium. He took a whack early on, pulled out of a tackle and the Stoke supporters reacted angrily when the winger failed to chase an overhit pass from Choupo-Moting. Hughes withdrew him after 57 minutes and Shaqiri could not get off the pitch quickly enough.

Newcastle were now looking more and more dangerous. Gayle had a penalty appeal turned down when Zouma bundled into him and three minutes later the visitors took the lead. Jacob Murphy accepted the invitation to run into the space that opened up for him on the right flank and delivered a low centre that Pérez, arriving just behind Geoff Cameron, tucked away from six yards out. Diouf then had that late chance for Stoke, after Crouch had headed back across goal, but this was Newcastle’s day.