Celtic warm up for Old Firm with Dundee win 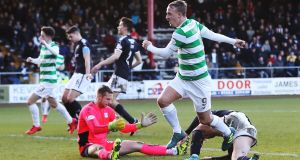 Celtic moved 11 points clear of Aberdeen at the top of the Ladbrokes Premiership with a businesslike 2-0 St Stephen’s Day win over Dundee at Dens Park.

In-form wide-man James Forrest opened the scoring from close range in the eighth minute before former Dundee striker Leigh Griffiths added a second ahead of the break for the impressive visitors.

Brendan Rodgers’ side dropped a gear in the second half but still had plenty in hand as they increased their advantage over the Dons who host Partick Thistle on Wednesday night.

The champions finish up before the winter break with an Old Firm derby against Rangers at Parkhead next Saturday. Having targeted a double-figures lead at the top by then, Rodgers’ side will be confident following three wins in the wake of their shock 4-0 defeat by Hearts at Tynecastle.

Griffiths and Forrest had been brought back into the team by boss Brendan Rodgers along with midfielder Callum McGregor.

They joined in the minute’s applause before kick-off in tribute to Dundee manager Neil McCann’s father, Eddie McCann, who died on Saturday morning.

The champions almost forged ahead in the sixth minute when McGregor steered a Mikael Lustig cut-back past Dens Park keeper Elliot Parish from eight yards, only to see it rebound off the post.

Two minutes later Forrest was more exact when he finished off a fine move involving McGregor and Kieran Tierney, sweeping the pass from the left-back in at the near post for his 12th goal of the season.

The Scotland winger turned provider in the 18th minute when he stood a cross up at the back post for Griffiths but he headed wide from inside the six-yard box.

In a rare Dundee attack, striker Faissal El Bakhtaoui’s lobbed effort came off the crossbar but referee Kevin Clancy had penalised him for a barge on Lustig.

Just before the half-hour mark, and after considerable delay for treatment, Hoops winger Jonny Hayes was carried from the field on a stretcher to be replaced by 18-year-old Michael Johnston. That came following a tackle by Dundee defender Josh Meekings, who limped off with former Celtic player Darren O’Dea taking over.

The champions were momentarily disrupted but regained control and in the 43rd minute, after skipper Scott Brown had regained possession in the middle of the park, fellow midfielder Olivier Ntcham sent Griffiths racing through and he dinked the ball over Parish from seven yards.

The Hoops were in the mood and in the seven added minutes for the earlier injuries Parish denied Johnston with his feet and tipped a Forrest drive over the bar.

Three minutes after the restart O’Dea headed a Jon Aurtenetxe free-kick over the bar, but that failed to signal a Dundee comeback.

Ntcham flashed another long-range effort wide, as did Dundee midfielder Paul McGowan moments later at the other end.

In the 70th minute a driving run by Forrest took him past a handful of Dundee players but ended with him screwing his shot wide from 12 yards, before home striker Sofien Moussa failed to connect properly with another dangerous Aurtenetxe set-piece.

Dundee, who had brought on Jack Lambert for El Bakhtaoui and Matthew Henvey for A-Jay Leitch-Smith to make their respective Dark Blue debuts, kept pushing forward but Celtic were determined to keep their third successive clean sheet before they prepare for the visit of their city neighbours.