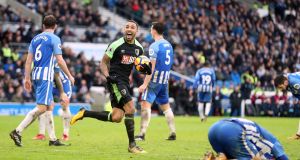 This was the harshest of Premier League lessons for Brighton & Hove Albion, who twice surrendered the lead as Bournemouth garnered a point from what proved thoroughly entertaining fare on a dank Sussex afternoon.

Eddie Howe’s side have taken flak for playing themselves into trouble – as they did once again here – but Brighton did just that as Callum Wilson earned a priceless point. Glenn Murray, deemed an unwanted commodity at Bournemouth, had put Brighton in front against his former club early in the second half before Wilson popped up to level 11 minutes from time. For Chris Hughton’s side, this will be filed under two points dropped.

Brighton began the new year with a real bounce, with Anthony Knockaert rounding off a slick team move. Shane Duffy’s crossfield ball found José Izquierdo, who played a neat give-and-go with Pascal Gross before sliding the ball across goal for Knockaert to rattle home only his second goal of the season with his right foot.

Bournemouth looked shellshocked, unable to get a grip on a match that was fast getting away from them. Without the spine of the team that savoured a late win over Everton on Saturday – with Joshua King and Ryan Fraser hamstrung and a groin injury meaning Nathan Aké was fit enough only for the bench – Bournemouth struggled to contain a forward-thinking Brighton, with Knockaert and Izquierdo finding plenty of joy down either flank, repeatedly outwitting the Bournemouth back line. A heavy shake of the head by Howe said it all.

After another one-two, this time between Murray and the – on this form – irresistible Izquierdo, the former forced a strong right-handed save from Asmir Begovic, the Bournemouth goalkeeper. Murray toyed with Steve Cook, dummying for Knockaert, who was dashing down the right until being tugged back by Lewis Cook.

Bournemouth then woke with Markus Suttner hacking clear Steve Cook’s goal-bound header. But the resulting corner saw Cook again rise above Duffy to head home the equaliser off the underside of the bar.

Bournemouth survived but swiftly came unstuck after the interval and this time it was of their own doing. Simon Francis, the Bournemouth captain, ran the ball out of the defence but straight into Izquierdo, who accelerated a ruthless Brighton attack, bearing down on Begovic before squaring for Murray, who had time to steady himself before slamming home. The Colombian £13 million club-record signing should have scored himself after galloping 40 yards upfield but shot straight at Begovic.

In an end to end affair, Wilson and Jordan Ibe combined before the latter tested Ryan, and then struck the post after jinking away from Gross. But Bournemouth eventually prospered the ugly way, with Wilson prodding home from close range after Brighton not once but five times failed to clear their lines from a corner. – Guardian service