Newcastle sink Southampton to end a fine week in style 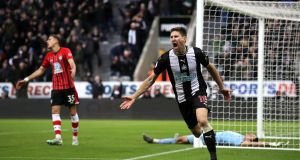 Steve Bruce’s introduction of first Andy Carroll and then Sean Longstaff from the bench changed the entire complexion of a contest Newcastle look like losing until the newcomers created game changing goals for Jonjo Shelvey and Federico Fernández.

Newcastle had returned from their win at Sheffield United in the early hours of Friday morning but their first-half performance was more redolent of a side jaded by a dawn arrival home following a Thursday night European tie at Spartak Moscow or Shakhtar Donetsk.

Slapdash and slow, laboured and lumpen, they sleepwalked into unforced errors and had Martin Dubravka to thank for two fine saves from the impressive Nathan Redmond in the wake of a Jetro Willems error.

With recently strong performers Jonjo Shelvey and Paul Dummett also making uncharacteristic mistakes the home side were all over the place.

The visitors were periodically fazed by Allan Saint-Maximin’s advances. Despite playing with a painful ankle injury, the former Nice winger seemed immune from the apparent fatigue afflicting his team-mates and single-handedly attempted to raise the tone.

His speed and tight control enabled him to zip beyond three markers before unleashing an excellent low cross for Miguel Almirón. For a brief moment the Paraguayan seemed set to score his first Newcastle goal but, instead, Almirón hesitated for a split-second, enabling James Ward-Prowse to clear as he shaped to shoot.

A combination of industrial action on Newcastle’s Metro system, the demands of Christmas shopping, a cold, wet afternoon and disenchantment with the club’s owner, Mike Ashley, meant the crowd was 42,303, the lowest in the league this season. That is 10,000 below capacity and the scores of empty grey plastic seats only exacerbated the general air of apathy.

Fortunately for Southampton Danny Ings refused to succumb to this downbeat mood. The second half had barely begun before the striker scored his fifth goal in five games. It arrived after Fabian Schär – newly on for Ciaran Clark – misread Jack Stephens’s long punt forward and Ings shrugged off Fernández before shooting low beneath Dubravka.

As the Southampton manager, Ralph Hasenhüttl, bounded on to the pitch in celebration, Bruce immediately set about replacing the ineffective Joelinton with Carroll.

Bruce’s very own divine ponytail made a near instant impact. When a Shelvey free kick seemed to have been cleared Carroll won the ball back, chasing it down to the touchline, before delivering a superb cross for Shelvey, by now surging late into the box, to head past Alex McCarthy from 10 yards. It was his third goal in three games.

For a little while after that Newcastle lived dangerously but Southampton failed to exploit their shaky concentration sufficiently to properly test Dubravka and then Bruce made what turned out to be an inspired substitution.

On came Longstaff to tighten the midfield and very quickly the newcomer unleashed a shot McCarthy could only parry into the path of Fernández who revelled in lashing the rebound home.

Longstaff then emphasised his importance at the other end courtesy of a splendid injury-time block to preserve the three points, while lifting Newcastle to 10th and depositing Southampton back in the bottom three. - Guardian