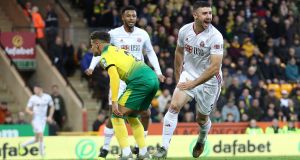 Sheffield United were promoted alongside Norwich City last summer, but taught their hosts some harsh Premier League lessons as they came away from Carrow Road with all three points.

Two goals from wing-backs Enda Stevens and George Baldock in a four-minute burst after half-time were enough for Chris Wilder’s side to extend their unbeaten away run in the top flight to eight matches. For Norwich there was only another reminder that their defensive frailty make them hot favourites for relegation. If there was any consolation, it was that both sets of supporters found common ground in their loathing of VAR.

This was a resumption of hostilities from two fiercely contested seasons in the Championship. The first encounter between Daniel Farke and Wilder in 2017 saw a smash-and-grab win for Norwich and the Blades manager blowing his top at the late arrival of the Norwich bus. United won two of the three games that followed, and drew the third. By the time both managers had outlasted the competition to claim automatic promotion from the Championship last season, they had earned each other’s respect.

For this first encounter in the Premier League, Wilder brought back his first choice strike force of Lys Mousset and Eddie McGoldrick. Farke, meanwhile, changed his formation, from a 4-2-3-1 to a 4-1-4-1, introducing even more technical midfielders than normal into the mix. Controlling possession in the middle of the park, it seemed, would be Norwich’s approach to breaking up United’s 3-5-2 which had seen them so impressive on the road this season.

The match began with a minute’s remembrance for Ron Saunders, before his timeless success at Aston Villa the first manager to take Norwich to the top flight back in 1972. The opening passages of the match were keenly contested, and while Norwich did have more of the ball and came close to picking the right pass, United were the more dangerous with a barrage of crosses from the left-hand side. In the 26th minute Ben Godfrey could only head one such ball from Enda Stevens into the ground in front of him, but McGoldrick scuffed his effort from 10 yards out.

A minute later and Norwich opened the scoring after Kenny McLean won a corner chasing down an Emi Beundia through-ball. The Argentine took the kick and dropped the ball just beyond the front post. Where McGoldrick got to it but could only put his header straight up into the air. As it dropped, via Norwich defender Christoph Zimmermann, Alexander Tettey was on to it and struck a clean left-foot effort just inside the post. Video replays made it seem clear that the ball had come to him off Zimmermann’s arm, but VAR allowed the goal to stand. This decision earned no shortage of derision from the travelling support.

Norwich went into half-time ahead and were behind within seven minutes of the restart. United came out with an intensity they had not been able to muster in the first half and continued to pepper the Norwich box with crosses. In the 48th minute it was George Baldock’s turn to deliver a peach, hit early from wide right. The wing-back bent the ball all the way to the far post where his opposite number, Stevens, rose above the diminutive figure of Max Aarons and powered his header into the net.

The next goal, in the 52nd minute, was all Baldock’s own. A low cross into the Norwich box was cut out by Mario Vrancic, but bounced away from the Bosnian 18 yards out. Baldock collected it, span around the Norwich man and drove a low shot back across goal and beyond Tim Krul.

United had a third goal ruled out by the referee, Simon Hooper, and, after an incredibly lengthy check, by VAR too. If this set the United fans off they were soon joined by their Norwich counterparts, baffled after a red card for Chris Basham was reduced to a yellow after electronic assessment. On the pitch Norwich huffed and puffed but had only one decent opportunity, with substitute Todd Cantwell’s shot well saved by Dean Henderson. – Guardian

1 Blackmore back among the winners at Fairyhouse