Guardiola has no issues with Sterling describing Real Madrid as ‘fantastic’ 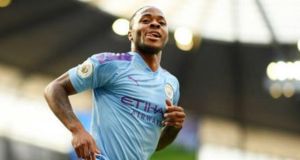 City’s Raheem Sterling: “I am a player, and I am always open to challenges. But right now my challenge is at City, and I’m really happy.” Photograph: Getty Images

Pep Guardiola has said he is relaxed about the interview Raheem Sterling gave to a Spanish news outlet before Manchester City’s game against Real Madrid next week.

Sterling expressed admiration for the La Liga leaders, describing the club as “fantastic”, though stressed he was happy at City when the subject of a possible move came up.

“The players are free to talk and say what they believe and what they think,” Guardiola said. “So we are not here to tell them what they have to say. It’s normal to make an interview for the Madrid media and speak about Madrid.”

Sterling refused to rule out the possibility of joining Real Madrid in the future. The 25-year-old is a reported transfer target for Real after City’s two-year ban from European football for breaching financial fair play rules. Sterling has been linked with a move to the Bernabéu in the past, but he is contracted to City until 2023.

In the interview with AS, Sterling was asked whether he would one day like to play for Madrid and responded: “How do I answer that one? Is the camera live or is it just taking pictures?

“No one knows what the future will hold,” Sterling added. “I am a player, and I am always open to challenges, but right now my challenge is at City, and I’m really happy. I have a contract with City now and I have to respect this.

“Real Madrid are a fantastic club. When you see the white shirt you know exactly what the club stands for, it’s massive.”

The England winger was pictured on the cover with Real Madrid and Manchester City shirts draped over each shoulder.

Asked about speculation linking him with a move to the Bernabeu, Sterling said: “It’s something that you see all the time, but I’m a City player and I’m enjoying it at the moment, even if things haven’t gone quite as planned in the league. We now have a massive opportunity in the Champions League.”

Race to be fit

City play Real Madrid in the last 16 of the Champions League, with the first leg at the Bernabéu on Wednesday and the return game at Etihad Stadium on March 17th. Sterling is facing a race to be fit in time for the tie after suffering a hamstring injury against Tottenham earlier this month.

Guardiola, asked more broadly about the prospect of players wanting to leave in light of the ban, which the club are appealing against, said: “I am completely sure of their commitment… At the end of the season nobody knows what is going to happen, and with calm we are going to decide to do what we want, what the players want.”

City are at Leicester on Saturday, and Guardiola expressed admiration for the job Brendan Rodgers has done on his return to the Premier League and the continuing potency of Jamie Vardy. The striker has a good record of scoring against City, and Guardiola admits his side’s system seems to suit Vardy’s style.

“We play 40 metres in front, it’s perfect for him,” he said. “He scores against all teams, not just us, and he scores goals in the box too, but in the final third he is exceptional. For movement, intensity, high pressing and finishing he is one of the best I’ve seen.” – Guardian

My favourite sporting moment: Roscommon minors restore pride to a county 06:30
Women’s sport gets the conversation started on pelvic health 06:30
Harry McNulty: Seeing the world, from Sevens to dog-sledding 06:00
Pro14 nations could miss out on €15m in TV revenue if league is not completed 06:00
Italian Olympic 800m finalist Donato Sabia dies from Covid-19 aged 56 20:16