Ferguson, Charlton and Law among the funeral mourners in Co Derry 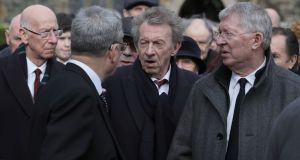 Manchester United greats Bobby Charlton, Alex Ferguson and Denis Law were among the mourners who have gathered for the funeral of club hero Harry Gregg.

The former Northern Ireland international goalkeeper was hailed for his courage after the Munich air disaster in February 1958, in which 23 people were killed. He died earlier this week aged 87.

His funeral was held at St Patrick’s Parish Church in Coleraine, Co Derry.

Gregg survived the Munich crash and twice returned to the burning fuselage to drag United team-mates and strangers to safety.

He rescued United players Charlton and Dennis Viollet from the BEA Flight 609, as well as a 20-month-old baby and her badly injured pregnant mother.

BBC NI sports presenter Stephen Watson, who delivered a eulogy, said Gregg was tormented by guilt and grief after Munich.

“Harry Gregg’s notoriety because of the Munich air crash came at a price – it cast a shadow over his life that he found difficult to dispel, but he always carried it with grace,” he told a packed church.

“Harry was determined that even though Munich shaped his destiny, it would not shape his life. Harry’s actions, though, on the runway that fateful day meant he transcended sporting greatness. He was called the Hero of Munich, but he always wanted to be remembered simply as a footballer and a coach of some repute.

“In his own words: ‘I’m Harry Gregg from 34 Windsor Avenue in Coleraine who played football – I was useful on some days and rubbish on others. That’s how I want to be remembered. Not for something that happened on a spur of a moment’.

“Harry Gregg. What an incredible man, and what a remarkable life. We will never forget you. We celebrate your life today.”

In nine years at United, Gregg played 247 times, including in a 3-0 win over Sheffield Wednesday just 13 days after the Munich tragedy.

Gregg became the world’s most expensive goalkeeper when Matt Busby’s United paid Doncaster £23,000 in 1957 and he was voted the best keeper at the World Cup a year later.

He won just 25 caps for his country during an international career that was hampered by injury.

Gregg had spells with Windsor Park Swifts, Linfield reserves and his local club Coleraine before moving to England to sign for Doncaster at the age of 18. He played for Rovers between 1952 and 1957.

When he retired from playing, a managerial career followed, with spells in charge of Shrewsbury, Swansea, Crewe and Carlisle.

Ken Early: Despite coronavirus, Premier League season must be finished if at all possible
Here is your handy guide to sport on television this week

1 ‘For 25 minutes I ran out of oxygen’: Pepe Reina on his coronavirus battle
2 Garry Ringrose to stay with Leinster as he signs two-year central contract
3 Rory McIlroy admits Portrush nightmare was catalyst for his return to the top
4 Sky Sports customers set to save on bills until Premier League returns
5 Jack Grealish needs to show that his remorse is real this time
Real news has value SUBSCRIBE
Crossword Get access to over 6,000 interactive crosswords