Spaniard proving a more than capable replacement for Diego Costa 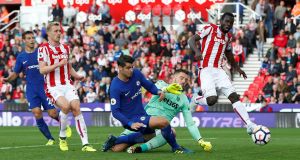 Chelsea continued to show there is life after Diego Costa with another Premier League victory at Stoke, with Alvaro Morata scoring a hat-trick in a 4-0 win.

Morata, the club-record signing bought to replace Costa, was on the scoresheet again early on before Pedro extended the lead on the half-hour mark. Both goals came from defensive mistakes by Stoke, whose manager Mark Hughes had demanded a response from his players following the disappointing midweek defeat at Bristol City in the Carabao Cup.

He did not get it, with Morata rounding off the win in the final quarter-hour.

The game was just over a minute old when Cesar Azpilicueta’s long ball forward dissected Stoke’s makeshift back line and allowed the lethal Morata to take a touch and finish calmly past Jack Butland.

With Kurt Zouma, on loan from Chelsea, ineligible against his parent club and Ryan Shawcross, Geoff Cameron and Kevin Wimmer all out injured, Glen Johnson, making his first Premier League start of the season, and Erik Peters played either side of Bruno Martins Indi in Stoke’s central defensive three and Chelsea capitalised on the unfamiliarity immediately.

It was Morata’s fourth league goal since joining the club in the summer from Real Madrid with the impending departure of Costa in mind. Relations between Costa and Chelsea manager Antonio Conte began to deteriorate in January when the striker reportedly had his head turned by a big-money offer from the Chinese Super League, which soon evaporated.

It was further strained over the summer with the player - having initially been granted an additional summer break after being told he could leave the club - ending up in exile in Brazil. But on Thursday a deal was agreed for Costa to return to his former club Atletico Madrid and that move should be finalised next week.

Morata has so far proved to be an able successor and only a timely interception from Martins Indi denied him the chance of a second goal. Chelsea’s second goal arrived after 30 minutes and it came from another mistake.

Darren Fletcher attempted to chest the ball down to Martins Indi but got the weight wrong, allowing Pedro through on goal to score with a lovely finish from the edge of the penalty area. That was hard on Stoke, who had the champions on the back foot for much of the first half without really troubling goalkeeper Thibaut Courtois and arguably enjoyed the better of the second half up until Morata’s late double.

Mame Diouf went close for the hosts with an acrobatic effort just before half-time while on the other side of the break the same player slid another shot narrowly wide following a knockdown from substitute Peter Crouch. Courtois then kept out a header from Eric Maxim Choupo-Moting with 74 minutes on the clock.

Most inside the stadium could sense a goal coming, but it was a surprise when Chelsea scored it three minutes later as Morata accelerated past Johnson and Fletcher before clipping the ball beyond Butland. He completed his hat-trick in the 82nd minute when Azpilicueta and Cesc Fabregas combined to lay on a tap-in and seal a fourth win in five Premier League matches for Conte’s team.