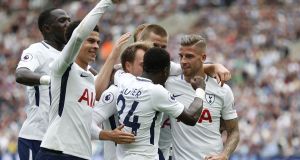 Tottenham survived a late West Ham onslaught to emerge with a 3-2 win from a ding-dong derby. Harry Kane scored twice in four first-half minutes and Spurs appeared to be cruising when Christian Eriksen added a third.

But Javier Hernandez pulled one back before Serge Aurier marked his full Spurs league debut with a needless red card. That left the visitors a man down with 20 minutes to go, and when Cheikhou Kouyate halved the deficit they must have feared another dose of West Ham woe.

The Hammers had, of course, inflicted near-fatal blows to Tottenham’s title hopes in the previous two corresponding fixtures. And while it was a little too early in the season for that they certainly looked in the mood to administer a bloody nose to their rivals - but this time Spurs just held out.

West Ham had made the brighter start with summer signings Hernandez and Marko Arnautovic going close. However, Tottenham withstood the early pressure and Kane was spared the embarrassment of missing a tap-in from a yard out by an offside flag.

West Ham’s problems really began on the half hour when Michail Antonio, only recently back from a hamstring operation, pulled up injured. Andy Carroll replaced the winger and had an immediate impact - but not in the manner he would have wanted. The striker’s misplaced pass infield - inside his own half - went straight to Eriksen who immediately sent Dele Alli scurrying clear down the right.

Alli swung in a perfect cross behind a West Ham backline caught horribly square, and Kane applied the finish with a glancing header past Joe Hart. Four minutes later Spurs, and Kane, had a second. This time Jan Vertonghen raided down the left and fed Alli, whose effort was saved by Hart but fell to the feet of Kane to roll into an empty net.

Eriksen helped himself to the third 15 minutes after the interval after Kane had thumped the foot of Hart’s far post with a free-kick.

Yet West Ham, to their credit, kept probing and pulled one back when Jose Fonte flicked Aaron Cresswell’s corner onto the head of Hernandez, who steered it past Hugo Lloris for his third goal of the season.

And when Aurier’s match came to a premature end after he scythed down Carroll to earn a second booking, Spurs were suddenly a bag of nerves. They were seriously wobbling in the 86th minute when Kouyate’s bullet header from Arthur Masuaku’s cross hit the net.

Carroll then claimed he was shoved as he leapt for a stoppage-time header, but referee Michael Oliver thought otherwise and Spurs had the points.