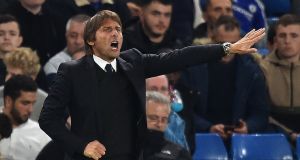 Antonio Conte has thanked Diego Costa for his contribution to Chelsea after the striker left for Atletico Madrid. Photo: Glyn Kirk/Getty Images

Head coach Antonio Conte thanked Diego Costa for his contribution at Chelsea on Friday, but declined to discuss the fractious conclusion to the striker’s spell at Stamford Bridge.

Costa won two Premier League titles in his three seasons at Chelsea, but admitted to pandering for a return to Atletico Madrid as early as his first season in England.

And on Thursday the 28-year-old Brazil-born Spain international was granted his wish after months of acrimony, claim and counter claim when Chelsea and Atletico agreed a fee reported to be in the region of £58million.

Costa joined the Blues from Atletico in July 2014, scoring 59 goals in 120 appearances.

“We want to thank him for what he did with this club. We wish him all the best for the future,” Conte said.

The Italian was asked about the breakdown in relations with Costa, but met the question with a firm rebuttal.

Conte said: “I think now it’s not important. I’m not interested to continue talking about this issue.

“I’m working with my players, I’m very happy to work with these players. Now it’s not important.”

Further attempts to discuss Costa, giving Conte the opportunity to reflect on their successful working relationship, were met with a similar response.

“I repeat: for sure we want to thank him for his effort last season with us. Not only last season but in the period that he played for Chelsea.”

Chelsea play at Atletico next Wednesday in Champions League Group C, and all parties will be relieved the matter has been resolved.

With Atletico under a transfer embargo and unable to register new players until January, Costa will have to wait to wear the red and white stripes again.

The deal is initially a loan until the end of the season with a commitment to buy.

Now Costa’s future has been resolved, Chelsea can look to the future.

Chelsea play three games in eight days, with the Atletico game between Premier League fixtures with Stoke and Manchester City.

Only midfielder Danny Drinkwater (calf) and defender David Luiz, who is suspended domestically and has a broken wrist, are absent.

Pedro is fit following a leg problem, while midfielder Tiemoue Bakayoko was involved in a minor car accident on his way home from training on Thursday but was uninjured.

Playmaker Eden Hazard made his first Chelsea start of the season in Wednesday’s Carabao Cup win over Nottingham Forest and is now fully fit.

Conte said: “Eden in the last game played very well. I think he played with good intensity. Now his injury has been overcome.

“Now we have to play three games. There is the possibility now to try to pick him for these games.”

Stoke have already beaten Arsenal and drawn with Manchester United at home this term.

Chelsea have received five red cards in the last nine games and Conte referenced discipline ahead of “a really tough game”.

He added: “We must prepare very well for this game in all the situations, tactically, physically, to be disciplined.

“We are working very well. I’m pleased with the commitment, the behaviour of my players.

“Sometimes it can happen, a red card. I was a player and I understand this situation.”