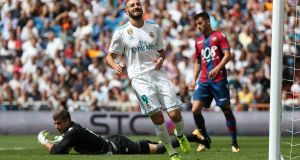 Real Madrid’s France forward Karim Benzema has signed a new contract at the club, which includes a €1 billion buyout clause according to local media reports.

Spanish and European champions Real announced on Wednesday that Benzema had signed a three-year extension to his current deal, which was due to expire at the end of next season, taking him through to 2021.

Benzema follows in the footsteps of team-mates Marcelo, Isco and Dani Carvajal, who have all penned new deals over the past two weeks containing clauses designed to avoid a repeat of the Neymar situation experienced by Barcelona in the close season.

Real’s rivals Barca were caught off-guard when Paris St Germain triggered the €222 million buyout clause in Neymar’s contract, which paved the way for the Brazil forward to move to the French club in August.

Benzema’s new deal means the forward, who is sidelined with a hamstring problem, is set to spend over a decade at Madrid, where he has been a regular first choice since joining in 2009.

He has made 247 Liga appearances for Real, netting 122 goals, and is the third-highest scorer currently active in the Champions League behind Ronaldo and Lionel Messi.