Like him or not, Chelsea saw the best of Diego Costa 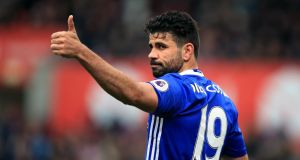 Diego Costa was a player Chelsea readily cherished when he was one of their own and his last appearance, in the FA Cup final in May, was one of his brutal best. Photograph: Mike Egerton/PA Wire

There is an irony that Diego Costa’s tortuous departure from Chelsea should be finalised, pending the results of a stringent medical, just after a fixture when his absence had been so keenly felt.

Not the Champions League stroll beyond Qarabag or even the midweek saunter past Nottingham Forest in the Carabao Cup. But, last Sunday, Arsenal ventured across the capital and earned a point, with Shkodran Mustafi, in most people’s eyes, emerging from the stalemate as man of the match. Even accepting that the centre-half is a Germany international and clearly a player of pedigree, it is hard to envisage he would have been quite so unruffled had Costa lined up for the hosts at Stamford Bridge.

Neither is that supposed to be a criticism of Álvaro Morata, the striker filling the void. The Spaniard secured from Real Madrid has been excellent to date, scoring goals and buying almost instantly into everything Antonio Conte demands of one of his players. Chelsea’s record signing will be a roaring success at Stamford Bridge. It is just that Costa would have disturbed Arsenal in a very different way.

Once it was clear the visitors were steeled for the contest, he would have bullied their backline, resorting to those same sly tactics that provoked a reaction from Gabriel back in late 2015, when he was only retrospectively sanctioned for raising his hands at Laurent Koscielny moments before Gabriel’s dismissal. He would have niggled, scrapped, pinched and whinged, driving Arsenal to distraction until they let down their guard, and then he would have pounced.

That is the theory but it is a familiar scenario, and one most Chelsea supporters celebrated regularly over the striker’s three-year spell in the Premier League. That stint resulted in Costa scoring 52 goals in 89 top-flight appearances, finishing as leading scorer in each campaign and playing a major part in the winning of two league titles. He was downright prolific and not all those finishes were bludgeoned.

There could be subtlety to his game when the mood took him. But, most memorably, he led the line like a man possessed, fuelled by streetwise aggression and canny opportunism. There were 33 yellow cards but only one red, for two bookable offences at Everton in an FA Cup tie, for all the times he pushed gamesmanship to the limit. The 28-year-old was a player Chelsea readily cherished when he was one of their own and his last appearance, in the FA Cup final in May, was one of his brutal best. His performance that day warranted more than merely his 58th, and last, goal for the club.

José Mourinho had praised him as complete and Conte as “fundamental” to the team’s all-action approach. There was even a time when the Italian appeared to be transforming the player’s disciplinary record. The striker went 10 games without accruing a fifth booking of the season, and a one-match ban, towards the end of last year.

When he was finally cautioned for dissent at Crystal Palace in December he still departed Selhurst Park having scored the game’s only goal and, upon his return from the ban, would go on to play another 10 domestic matches without a yellow. Aside from his impact out on the pitch he was popular among the playing staff – some team-mates have been in regular contact over the summer during his self-imposed exile in Brazil – a bundle of energy in the dressing room, a source of practical jokes and positivity when it suited him, and a figure who had to be involved at all times. He was an edgy life and soul, and his enthusiasm could be infectious.

The problem, of course, was that he was so high maintenance and just as likely to be stroppy as playful. The unpredictability was always likely to become a problem in the end. Rewind to January when Conte had instigated that remarkable revival within a group who had finished mid-table the previous year, Spurs having just curtailed a 13-match winning run, and it was Costa threatening to disrupt the newfound harmony at Cobham by expressing a sudden desire to depart for a money-flushed Chinese Super League.

Or retreat to when he had pined for a move back to Atlético in the summer of 2016 or even further to 2015 when he had returned for pre-season overweight. There were regular reminders this was an unsettled player.

Management, of course, is about steering a route through such crises. The Italian readily recognised the forward’s qualities at the tip of his team and, in truth, felt he had no real alternative option available in January, with Michy Batshuayi still adjusting to life in England. Conte’s show of strength was designed to ensure Chelsea were not knocked off their stride. But once it became clear the negatives outweighed the positives, and with good warning conveyed to the board to find a replacement, Costa’s time was up.

The brevity of Chelsea’s 30-word statement, posted on the club’s website, announcing an agreement over an initial £48.8 million (€57 million) transfer had been reached in principle with Atlético on Thursday hinted at a club who had tired of the circus that comes with Costa. The same could be said for Conte’s text message over the summer, which prompted public outrage from the striker’s camp but was hardly revelatory in its content. The divorce had become inevitable back in January. Guardian Service