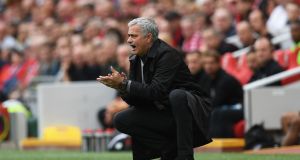 Jose Mourinho: “For me, the second half was a bit of chess, but my opponent didn’t open the door for me to win the game.” Photograph: Shaun Botterill/Getty Images

At a quarter to three on Saturday afternoon, Jurgen Klopp summed up Liverpool’s 0-0 draw with Manchester United. United wanted one point and got it, Liverpool wanted three and didn’t get it, so United were the happier side.

It sounded accurate at the time, but two hours later, as Manchester City walked off the field at the Etihad Stadium having beaten Stoke 7-2, you wondered if United could still feel so satisfied with their afternoon’s work.

It was a day when Jose Mourinho did what many said was impossible and found a solution to Liverpool’s defensive crisis.

It turns out that even Simon Mignolet, Dejan Lovren and Alberto Moreno can get clean sheets against teams that keep eight outfield players behind the ball at all times.

The most entertaining part of these regular Mourinho “masterclasses” in the Premier League comes after the game when you get to see Mourinho pretend that his ultra-defensive tactics are not in fact defensive.

Instead, when it was suggested to him that it had been a dull game, he replied that anyone who thought so didn’t understand football.

Those who read football in a different way would understand that since Liverpool had not abandoned all caution in search of a late breakthrough, they had not really been any more enterprising than Mourinho’s side, despite controlling the game for 90 minutes and creating nearly all the chances.

“I know that probably you think we were defensive and they were offensive,” Mourinho said. “Well, you were at home and you don’t move anything? I don’t know.”

Since Mourinho clearly believes in the kind of football he gets his teams to play, you wonder why he can’t be more openly proud of it; why can’t he just come out and say yes, we were super-defensive – and wasn’t it magnificent?

Only Mourinho can say why he tries to gaslight people into believing that his team is no more defensive than any other big team. The fact that he makes the effort tells you that he thinks something important is at stake. But you only have to listen to Mourinho and Klopp analysing the same game to understand that they see football in fundamentally different ways.

Here is Mourinho explaining how United were planning to score, and why they didn’t: “I think he [Klopp] did well, honestly. He didn’t let the game break. Lingard and Rashford were waiting for the game to be broken but the game wasn’t broken.”

And here is what Klopp was telling his players: “First of all you need to work, you need to continue working hard, really hard, and then, at one point, it will happen.”

The question is, does this really matter? Is there any meaningful way in which one approach is better than the other?

From the point of view of results, it’s impossible to make a conclusive case either way. And while fans are generally more excited when they see a team taking risks, the truth is that they can get behind any style of football that wins. For most of the people surrounding and following the game, the result is the only thing that counts. The question of whether a coach is proactive and self-focused or reactive and other-focused is of strictly academic interest.

There is only one small constituency in football to whom this question really does matter: the footballers themselves.

Klopp, Pep Guardiola, Alex Ferguson and Arsène Wenger are four very different managers with different ideas about football, coaching and management. They do however have one thing in common, which is a commitment to helping their players express the best versions of themselves. They want the players to think for themselves because the players are the ones who create the game.

By contrast, managers such as Mourinho and Giovanni Trapattoni want the players to do what they are told.

In their view, individual ego is the greatest obstacle to collective success. The football pitch is not the place for self-expression; if you want to see a show, go to the circus. The managers are the ones with agency, the players are instruments of the manager’s will.

Mourinho often speaks about his teams’ matches as though he were the only one playing. At Anfield, his summary was: “For me, the second half was a bit of chess, but my opponent didn’t open the door for me to win the game.”

We know that both approaches can win matches and trophies and plaudits. But which kind of team would you rather play for? It depends on your own temperament.

Many of the big names Mourinho managed at Real Madrid belonged to the latter group. These players, who thought of themselves as the best in the world, eventually tired of playing for a coach who didn’t seem to share that confidence in their ability. They felt that they were a big team and they wanted to play like one.

For now, at least, United’s stars still seem content to be told what to do.