Jose Mourinho: I will not end my career at Manchester United 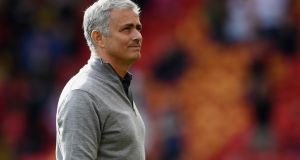 Jose Mourinho has ruled out spending the rest of his career at Manchester United.

The Red Devils manager said in an interview with French television that he was certain he would work elsewhere.

Mourinho was appointed by United in May 2016 and led the club to the Europa League title last season.

His side are vying with neighbours Manchester City for top spot in the Premier League this term, but 54-year-old Mourinho is keeping his future options open.

He told TF1’s Telefoot programme: “The only thing I can say is that I’m still a coach with worries, with ambitions, and with the desire to do new things.

Asked if that meant at Manchester United, Mourinho said: “Yes.”

Mourinho was responding to the question of whether he might one day be tempted to join Paris St Germain.

The club that broke the world transfer record by paying €222 million to bring in Neymar from Barcelona in the summer have previously been linked with the Portuguese.

And Mourinho explained his son has taken the French capital giants to his heart.

“The other day, my son who lives in London went to Paris and not to Manchester to watch the match,” Mourinho said.

Asked why his son chose that option, Mourinho said: “Because at the moment in Paris there is something special. Magic, quality, youth, it’s fantastic.”

Former translator Mourinho, who showed his multilingual skills by conducting the interview in French, has previously had high-profile spells in charge of Porto, Chelsea, Inter Milan and Real Madrid.